M2 Animation on the battle-filled, full-CG trailer they created for Warhammer 40,000.

“In the grim darkness of the future there is only war.” That is the battle cry tagline for Warhammer 40,000’s new edition, which was released earlier this year. Produced by Games Workshop, the tabletop game is the most popular miniature wargame in the world and is set in a dark time in the future where armies fight tirelessly against each other. 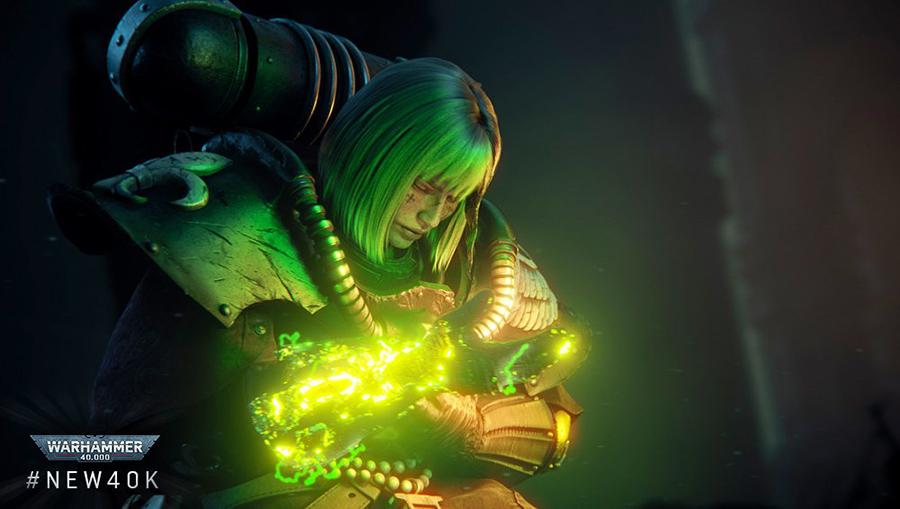 Bangkok, Thailand-based M2 Animation used Maya, Houdini, Nuke and Redshift to make an epic 3-minute, sci-fi trailer to promote the popular game. Designed in collaboration with Warhammer’s creators, the action-packed, animated short is meant for adult fans and includes mutants, aliens and many other elements from the Warhammer 40,000 universe.

M2’s Javier Sanz supervised the making of the cinematic trailer. We talked with him about the studio’s approach to the project, which brings a tabletop game to life in full combat. Here’s what he had to say.

How did M2 Animation get the Warhammer project?
We first worked with Games Workshop on the Warhammer ident, and they were very happy with the result and the way we worked together. After that, they asked us to do the trailer and we started working on it right away. It was a full-on CG production that lasted around seven months.

How did you come up with the storyline for the trailer?
Games Workshop wanted a short that showed the escalation of conflict in a Warhammer 40,000 battle. From a group of guards trapped in a standoff with some Necrons, to a massive battle of Ultramarines going against a horde of Necrons, all of the situations are connected by the Empire factions helping each other.

There are also a lot of things happening in the trailer that have not been shown in a Warhammer film before, like a Sister of Battle using her faith to heal herself. Games Workshop wanted to feature some of their new and updated characters too, including a brand new Necron Skorpech and Necron Overlord, the new Ultramarines and Sisters of Battle, and a new Primaris Captain. 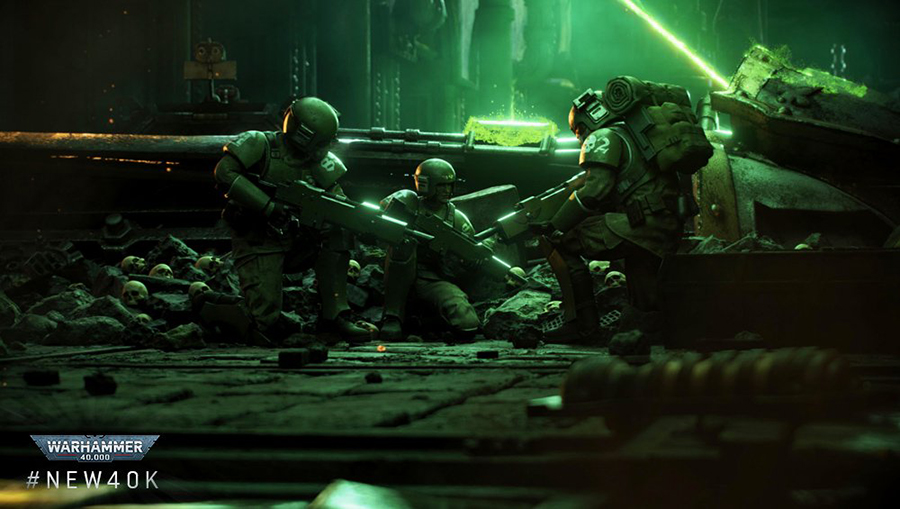 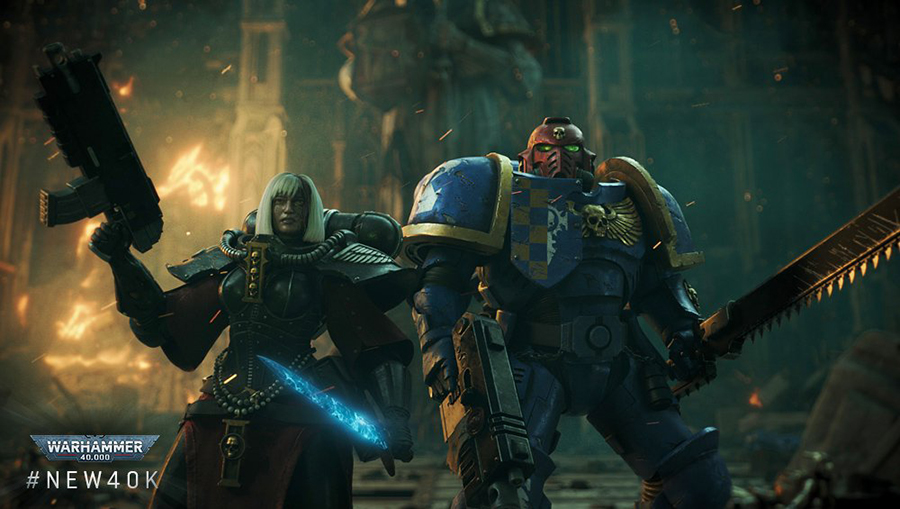 Describe your workflow.
We started with a 2D animatic based on storyboard stills. Thomas J. Mikkelsen and Filip Friis-Stanfeld agreed on the number of shots, effects, characters on screen, time warps and slow-motion shots, we started previz with some basic rigs. We used Maya for rigging and animation, and animations were exported as Alembic files. All of the other assets were mostly Redshift proxies, and we also used Redshift for lighting and rendering. We had a very complete Nuke template setup for compositors, so they could plug and play rendered sequences and start working right away. I’d say that at least 30 percent of the final look came from compositing.

How did you model the characters? And how did you replicate them to build armies?
Most of the characters were modeled in ZBrush, and all of the other assets were modeled in Maya. We used Substance Painter for texturing and shading, and we benefited from Redshift’s versatility because were able to finalize the look for rendering in Maya. We used Redshift proxies for the Scarab swarm. The rest of the characters were cached alembic files with Redshift shaders. We used key frame animation for the whole project, which gave us more creative freedom than motion capture. It also gave us more time to find the right style for each of the different armies and explore more choreography for the fight scenes. 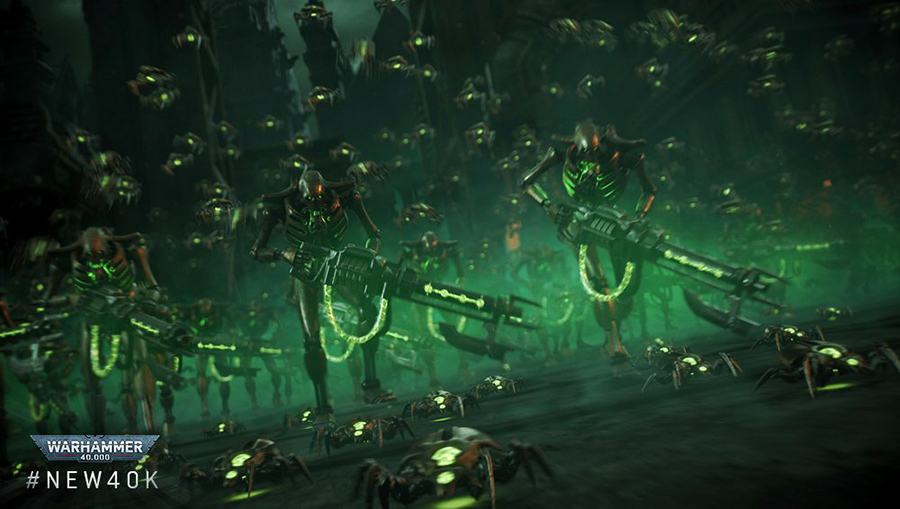 Tell us more about how you used Redshift’s proxy system?
We wanted the trailer to look and feel like it belonged to the Warhammer Universe. That required very high poly counts, 8K textures when possible and dozens of effects and volumetric lighting. I was worried that we were going to hit a wall and have tons of issues for final renders. But working with the dev team, I designed a Redshift proxy component system that allowed us to create all of the buildings and assets used for the set dressing.

Those component Redshift proxies with Redshift-converted textures—columns, rocks, walls, arches, tiles and more—were duplicated as instanced components and treated like LEGO pieces in order to create new environment assets. Those assets were then converted to new, nested RS proxies. And the environments assets could be duplicated on a shot several times. In the end, only the original components were loaded into VRAM, giving us so much freedom to have millions and millions of polygons, and tens of thousands of textures. Renders were still pretty fast, even with that amount of data on screen. 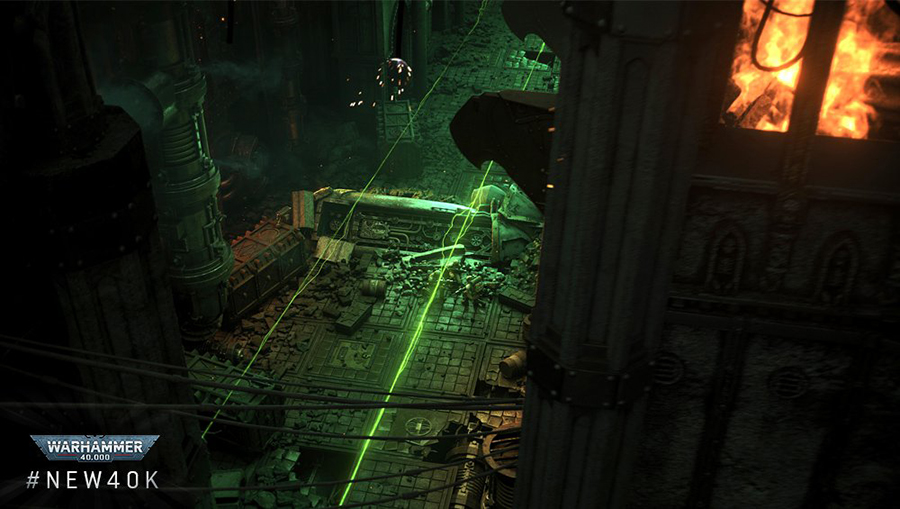 When did you first start using Redshift, and why did you choose it?
I started using Redshift in production about three or four years ago when I was working at Fin Design + Effects and they switched to Redshift as their primary renderer. M2 Animation started using Redshift for the animated TV series LEGO Friends because Redshift’s speed and quality were a perfect match for what we needed to do for that show.

I really like Redshift for the look-development process. It's agile, fast, and gives the artist time to focus on the art. Their IPR (Interactive Photorealistic Rendering) works really well and shaders are very intuitive. You also have the freedom to create custom AOVs for composting. I don't think we could have delivered this project the way we wanted to without Redshift. 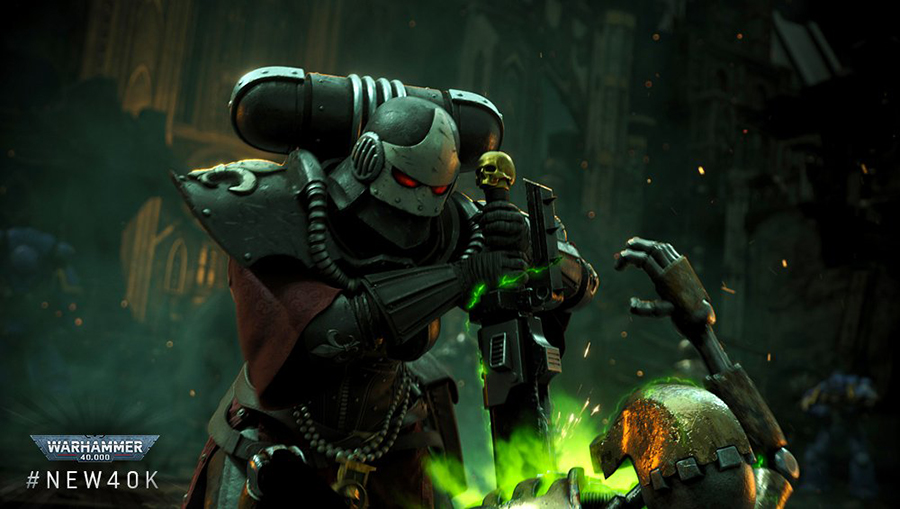 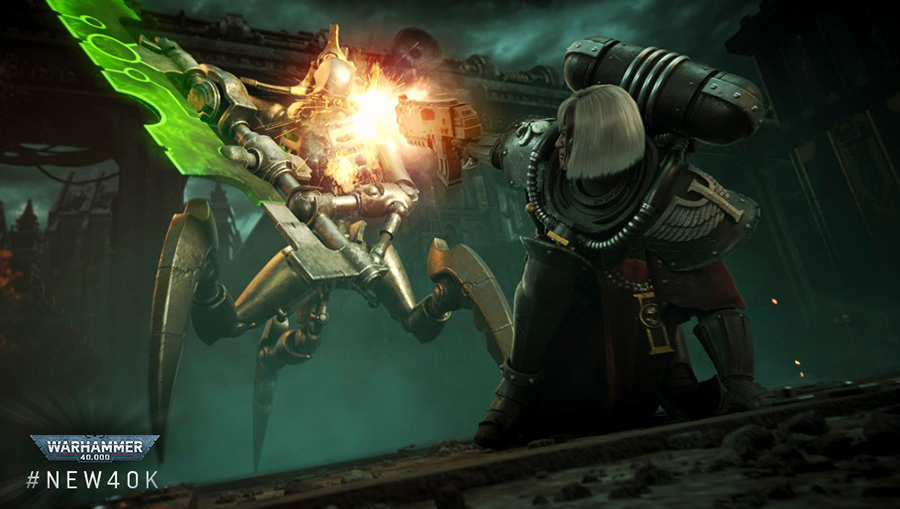 What did you like most about working on the Warhammer trailer?
It was so much fun to work on this project. The Warhammer fan base is a very tough crowd. Pressure was on from the start, and it was a challenge that were ready to take on. I am extremely happy with the good response we got from the fans. Warhammer's lore and its universe are huge and very difficult to portray in a 3-minute film. Every artist involved on this project lived and breathed Warhammer during the production of the trailer, and you can see that in the final result.

Steve Jarratt is a freelance writer in the UK.