VFX Their Own Way

Stormborn Studios on how their small team creates VFX for films, games and high-profile TV shows, including Man in the High Castle.

Vancouver-based Stormborn Studios may have been founded by Goran Pavles and Manuel Tausch in 2017, but the duo's combined experience in the industry spans more than 20 years. Specializing in cutting-edge VFX sequences, Stormborn has worked on many high-profile projects for film, TV, games and commercials. 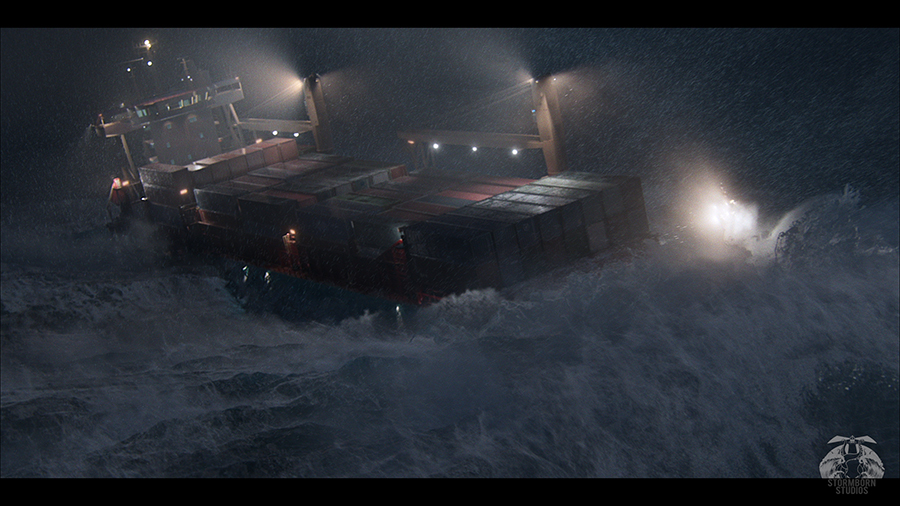 Using their proprietary pipeline, which includes Houdini and Redshift, Stormborn created some intense live-action sequences for season two of the History Channel series Project Blue Book (https://www.history.com/shows/project-blue-book) and season four of Amazon Prime's The Man in the High Castle.

We talked with Pavles and Tausch about Stormborn's contributions to both of those series, as well as how the small studio leverages a variety of tools to create state of the art FX and VFX, ranging from collapsing buildings and earthquakes to explosions and tidal waves.

Goran, how did you get into this industry?
Pavles: I've been working in CG professionally for about 14 years. I was about 20 when a friend showed me how he created a 3D wine glass in 3ds Max and applied a transparent material to it. My mind was blown, and I downloaded the software and joined forums. I got addicted to learning, trying, and sharing all of the magical things one can do in a 3D program. Soon, I got sucked into the procedural and dynamic world of particles, and it dawned on me that many movie effects that I was fascinated by were actually made with 3D software.

I saw an opportunity and career path, and I started to get professional offers. In 2008 one of my mentors, Joe Scarr emailed to ask if I wanted to join the production of Roland Emmerich's 2012 (). I couldn't believe it. Hollywood was calling! 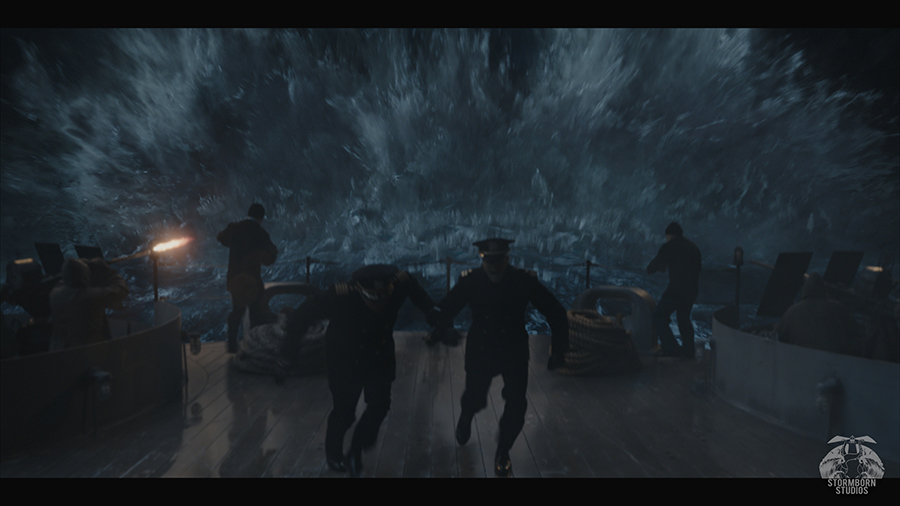 Manuel, tell us about yourself.
Tausch: I graduated from the SAE Institute in Munich in digital film and animation and then worked as a 3D generalist for a couple of years. Editing music videos and designing flashy motion graphics was fun, but I was looking for my next big challenge in feature films. My dream was to work abroad on big Hollywood blockbusters. Goran and I met online in 2009 while I was studying rigid body simulations with Thinking Particles in 3ds Max.

He quickly became my friend and mentor, teaching me many valuable tricks and destruction workflows over many Skype sessions. A few months later I was on a plane to Vancouver to join Prime Focus VFX in my first role as an FX Artist for Final Destination 5. They hired me based on my newly acquired skill set and asked me to digitally destroy Vancouver’s iconic Lions Gate Bridge.

Why did you decide to launch Stormborn?
Pavles: I was still working in 3ds Max, but Manu switched over to Houdini and worked for studios around the world before circling back to Vancouver to become an FX lead at Method Studios. I was thinking of going back to Europe, but I had to wait for another year to finish my permanent residency process, so I joined Manu’s team at Method. This time, I was the student learning Houdini from him.

Working together we realized how much both of us like to think outside the box and apply unconventional solutions to achieve and surpass our visual goals. We're passionate about making impressive effects that display scale and forces beyond imagination. Tsunamis, tornadoes, volcanic eruptions, earthquakes, avalanches, explosions and big structures collapsing—those are the kinds of projects that get our hearts beating! 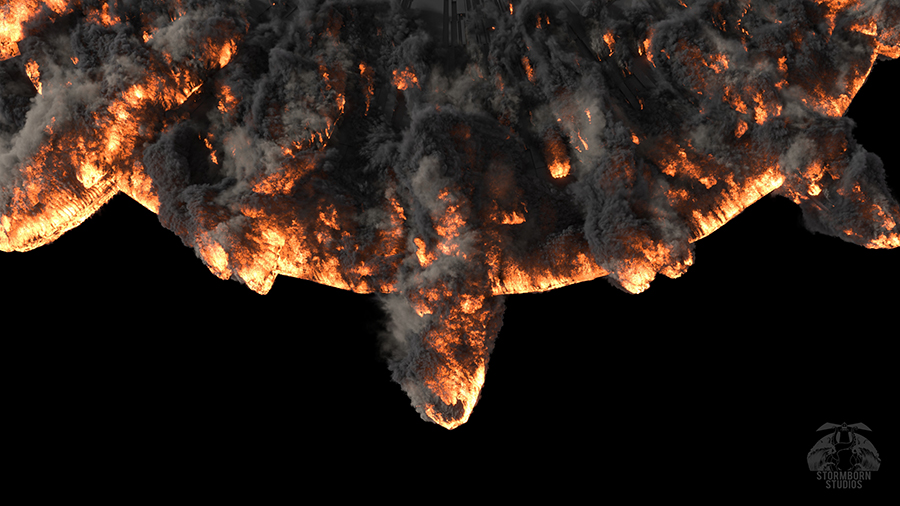 We started talking about what it would be like to work in an environment where we had the freedom to research, invent and be encouraged to try something new. After a while, we realized we'd only find that environment in our own studio, so we launched Stormborn Studios. At first, we did all of the shot work by ourselves. As we grew, we started hiring other artists to bring their own ideas to the table, which allowed us to take on bigger projects.

Describe Stormborn's process and proprietary pipeline.
Tausch: We like to be open minded to new solutions, as well as to our clients and their projects. As a small studio, our budget for expensive equipment is limited, which means we need a powerful and modern pipeline. We are constantly optimizing and automating our workflows, and our experience allows us to achieve a final look in fewer iterations than a traditional VFX studio.

Our objective is to free our minds from time and pressure as much as possible. To deal with short time schedules and limited budgets, we need fast hardware. Our pipeline consists of four main pillars: strong machines based on AMD Threadripper technology for CPU intensive tasks, and Nvidia cards for GPU intensive tasks. We use Houdini for 3D and Redshift for rendering.

Redshift has been crucial to our workflow. It drastically lowers our hardware and licensing costs, and it is incredibly fast. It allows us to render scenes with heavy data and large amounts of particles in high quality with relatively short render times. Also, with Redshift, we can illuminate volumes with HDRIs without adding too much render time and noise while adding beautiful tints based on the HDRI. Even global illumination and illumination from emissive objects, like fire, are not dealbreakers with Redshift.

Tell us about Stormborn's work for Project Blue Book.
Pavles. That was our biggest and most challenging FX sequence so far. It was the introduction to the final episode of the second season and the production was led by the show's VFX Supervisor, John Gajdecki and Producer Gillian Pearson. There are multiple sequences of navy ships in the Barents Sea, UFOs that dive in and out of the ocean during day and night-time scenes and a tidal wave that nearly capsizes a ship. 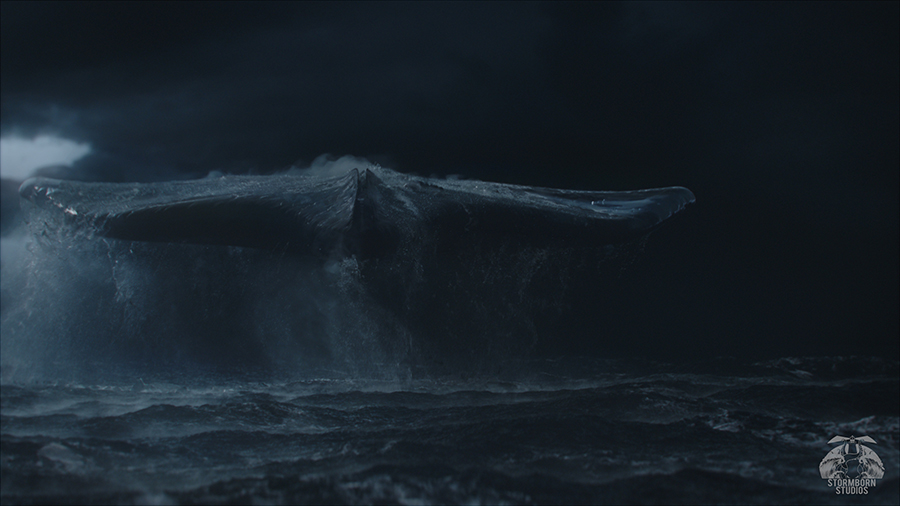 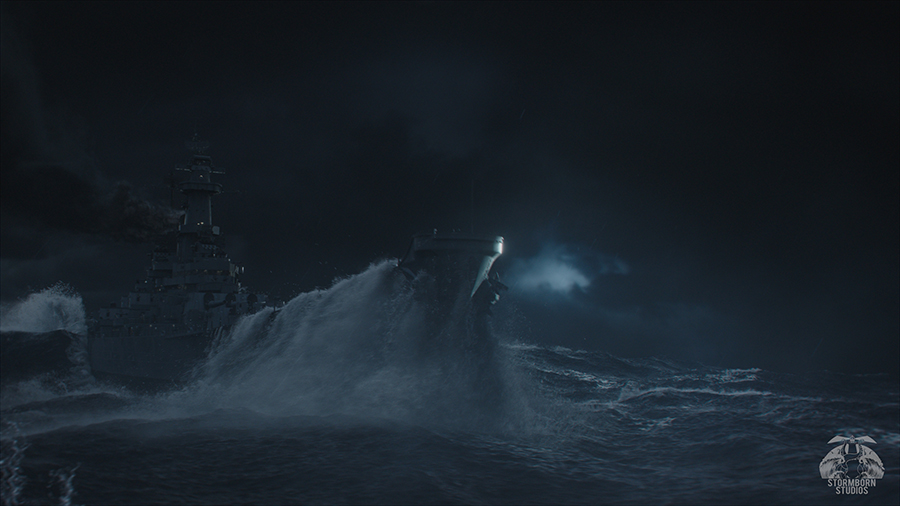 To handle it all, we hired Igor Zanic, Nikola Ilic and Mirco Paolini, some of the industry's best Houdini water effects technical directors, for the ocean scenes. Nathaniel Holroyd joined our team to do the shading and lighting of our FX elements. And Patrick Conaty composited CG elements over the plates and ship renders provided by the client. The smaller UFO encounter sequence was done by Megalis, a VFX studio in Tokyo.

We acted as the main vendor and were responsible for all of the FX and comp of the hero shots. We also rendered a latitude and longitude 360-degree ocean environment for the client to use in his own comps for the background. Everything was rendered in Redshift and having Igor on the team really helped because he has actually made a course on using Houdini's ocean tools with Redshift. We made the 360-degree ocean render by rendering the ocean in eight slices and stitching those together in Nuke, allowing our client to put that into their shot composites and rotate it to fit each scene correctly. (Learn more about Stormborn's process for Project Blue Book)

And what did you do for Man in the High Castle?
Tausch: For the show's season four finale, we were asked to create nine complex VFX shots involving an explosion that causes a Nazi train to derail into a snowy environment. We collaborated with another studio, Barnstorm VFX, who provided the assets and animations we needed to get started. The project was challenging for our small studio because the sequence included a combination of rigid body dynamics, as well as volumetric, grain and particle simulations.

It helped that we could leverage Redshift's GPU rendering because, with only nine machines and licenses, it allowed us to build a render farm that had the power of 21 render nodes. Our in-house pipeline helped us split the large-scale environments into multiple sections to keep simulations times down. Senior FX Technical Director Andrew Graham built the Houdini setup that allowed us to gradually destroy the train and carry that destruction of the geometry from one shot to the next. We used Houdini's Bullet Solver to make the flying dirt, snow and debris from the derailing train look believable. 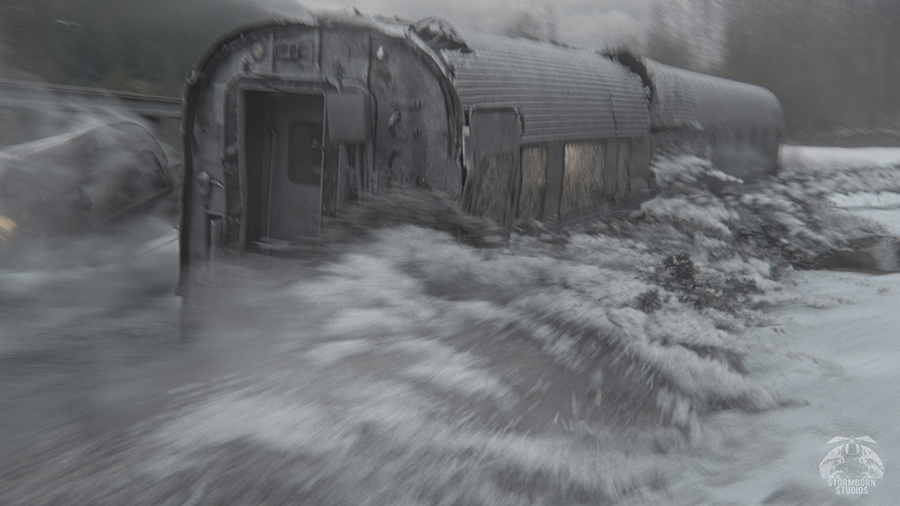 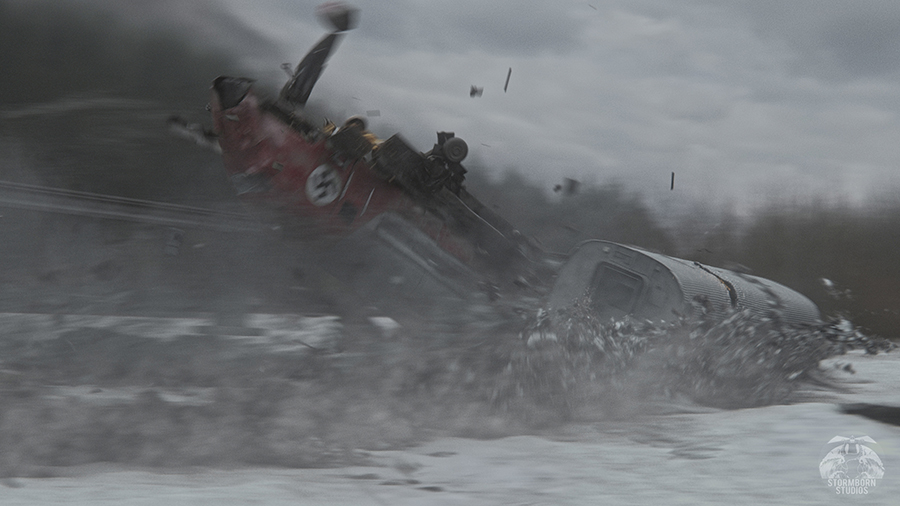 Barnstorm VFX was responsible for compositing the sequence, and rendering the environment and the main train asset, so we had to establish a smooth workflow between the two studios' animation, lighting and compositing departments. Together we established a workflow that allowed them to integrate FX elements into their comp properly. To help with client review, we put a database together that they could access, filter and sort by shot. (Learn more about Stormborn's process for Man in the High Castle)

Goran, what would you say Stormborn Studios enjoys most about this industry?
Pavles: Things are moving at such a fast pace in our industry. New technology is constantly being developed and pushing the limits of what can be done. One always has to be up to date, there’s no rest. While that might sound intimidating and exhausting, it has the opposite effect on us. There is no stagnation. There is no boredom. There is always something new, and that helps us stay sharp and be creative visually and technically. It is a very fulfilling profession when you look at it from that perspective. Running your own business comes with a whole set of new challenges but having the freedom to choose how to approach those challenges is a wonderful luxury.