Motion designer Danil Krivoruchko explains how he collaborated with artists around the world to make Blindsight.

The year is 2082. Thousands of celestial objects fall from the sky around the world. These “fireflies'' momentarily broadcast a massive signal, supposedly scanning and surveying the entire planet in a coordinated instant. It is clear that there’s an extraterrestrial presence.

This is the world according to Peter Watts’ sci-fi novel, Blindsight. In the years following the fireflies, ships are sent in an attempt to explore radio transmissions coming from a nearby celestial object. The third ship, the Theseus, is the first to carry a crew who set out to make first contact.

Inspired by the award-winning story, motion designer Danil Krivoruchko assembled a team of artists who used a combination of Cinema 4D, Houdini, Redshift, 3DCoat, ZBrush, and Maya to adapt the novel into a short film. The passion project was four years in the making and was made possible by a team of volunteer artists since there was no budget. Krivoruchko joined us to talk about the making of Blindsight, and here’s what we learned about the long journey to the film’s release.

Tell us about the film.
Krivoruchko: Blindsight is the most scientific science fiction novel I’ve read in the last ten years. Had any other writer attempted to tell the story, I think it easily would have been five different novels. Like the novel, the film takes place closer to the end of the 21st century. The story is about the crew of the spaceship Theseus, which was sent to research and possibly make first contact with an extraterrestrial object, called Rorschach, that sits about half a lightyear from Earth.

When I read the book, it felt so picturesque, like I was watching a film. I wanted to create something in that universe, but I never expected it would be something of this scale or that it would take so long. Learn more about the making of the film (including an interview with Peter Watts.)

Talk about your process for making the film.
Krivoruchko: My original plan was to just make illustrations for the gallery on Peter Watt’s website, but then some friends who also worked in 3D and visual effects agreed to participate. About a year into it, I realized we could afford to make a short film, although I didn’t think it would take another three years.

Because the novel was published under a Creative Commons license, the film had to be nonprofit so all of the artists who worked with me did it in their free time. It took almost four years to complete, but it was not a full-time job for any of us. I tried to do as much work as I could based on what I do well, like design, direction and visual effects. I even did some modeling in Houdini, which was my biggest weakness before this project. 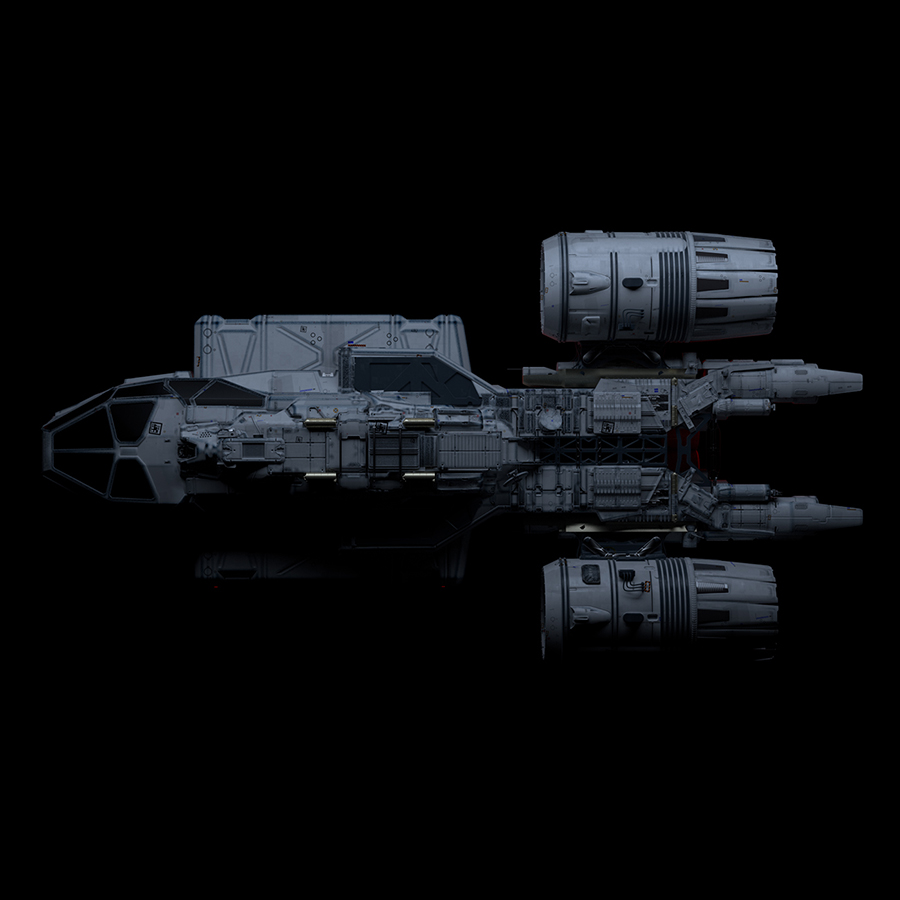 When something needed to be done that I can’t do, I reached out to acquaintances and artists on social media. Little by little, I found all the necessary people and together we managed to complete the project. I think, in all, about forty people took part in this project. I have to thank them all because I would not have made it without them.

How did you manage a team of forty over such a long period of time?
Krivoruchko: We didn’t have any type of formal pipeline. Everything was communicated through Google Docs, Google Sheets, and messengers. Since every shot eventually went through me, there wasn’t a need for a hierarchy that you would normally have in a studio environment.

Was there any pipeline in terms of the tools that were used to create the film?
Krivoruchko: Since the project was nonprofit, we just allowed each artist to use their own preferred software. We didn’t adjust everything to fit a studio pipeline. There is a mix of Cinema 4D, 3DCoat, ZBrush, and Maya. I used Houdini for the procedural design, rigging, animation, and layout. The compositing was done in Nuke and color grading and editing was done in DaVinci Resolve.

When it came to lighting, nearly every single shot was rendered in Redshift. There was no budget for render farms, so we relied on our own PCs. When I started working on this project, I only had one 1080ti GPU. By the time we finished, I had upgraded to two 2080ti. It was the massive shift to GPU rendering that allowed us to make projects like this. Just a few years ago, you would have needed a whole render farm, which only studios could afford. Now I can get that studio quality render straight out of my bedroom.

So you were rendering this at home and working full time?
Krivoruchko: Yes, I spent evenings and weekends working on the film when I was working full time. I was at Charlex in New York City, first as a VFX artist and then as a creative director. When I switched to freelancing, I had more flexibility to work on the project in between commercial jobs.

When did you realize you were going to need to move to GPU rendering?
Krivoruchko: There’s a scene with two scramblers, which is what the alien species is called, and I needed to switch from style frames to full-fledged animation. I was rendering in Arnold at that point and I realized that it was going to be impossible without a render farm. I decided to try GPU rendering, so I transferred the scene to Redshift and within a week I was already close to the original quality with one-tenth of the render time. I’ve never gone back to CPU rendering after that.

Describe parts of the film that you found particularly challenging?
Krivoruchko: The most technically complex shot of the whole film was where we had Rorschach, Theseus and a couple hundred scramblers in the same scene. Each of those assets included millions of polygons. We had to wait for all of the 3D assets to be modeled and ready before we could move on to animation, lighting and compositing. Working with such a heavy shot was a real technical challenge. Fortunately, the speed with which Redshift uploads pre-baked proxy files was a huge help.

Interestingly, the shot was laid out in Houdini and rendered in Redshift, but the artist in charge of Theseus' materials was used to working in Cinema 4D. We tried to transfer his results, and it was great because Redshift proxies created in Cinema 4D can be used perfectly in Houdini. Being able to transfer the geometry with lighting-ready material between software saved us a lot of time.

Talk a bit about the shot where the main character wakes up.
Krivoruchko: We used photogrammetry for that so we could make a 3D model for a convincing close-up. We had to work manually on topology and textures a lot in order for the asset to be used in the scene. Our character artist also created a couple of interim blend shapes so that the muscles and skin would deform correctly in animation.

It was not the simplest scenario for rendering—a photo-real character under a transparent cloth with the main light source behind him. But thanks to Redshift’s optimization options, the character was rendered in less than one minute per frame. Together with the rest of scene’s details, the rendering time was not more than 15 minutes per frame with an acceptable noise level.

How has COVID-19 affected your ability to screen the film?
Krivoruchko: Almost all of the festivals switched to online screening, which is good and bad. On the one hand, the main reason you go to any festival is to meet and discuss the film with the audience in an informal setting. On the other hand, most festivals have lifted the ban on releasing films online, so now I don’t need to keep the film locked up for a year. It’s been nice to see the film received so well at the festivals. To date we have thirty awards and nominations.

Michael Maher is a filmmaker and writer in Dallas, Texas.