Visual State explains how they used CGI and Redshift for artful snack promos.

Sydney Australia-based production studio, Visual State, is known for doing CGI-driven creative work for clients around the world. So when full-service advertising agency, True Sydney, got in touch to see if the studio could just retouch a few images related to a campaign for British snack food company, McVities, co-founder Ian Connor agreed, but he couldn’t help asking for a few more details about the project.

As it happened, the retouching component was just one small part of a much larger campaign that would contain multiple motion shots featuring the biscuits. True Sydney was undecided on how to create those shots; traditional table-top photography or potentially using CGI. So Visual State asked for the opportunity to show True Sydney what a CGI promo for McVities chocolate-covered pretzels would look like. Using a combination of Redshift and Cinema 4D, they created the pitch overnight and it won them the entire project.

“They thought our approach was awesome,” Connor recalls, adding that he and Visual State co-founder, Danil Gorskikh, spent the next day with the creative director going through a very loose brief and some rough pencil drawings of the shots they wanted. Though they were given a lot of creative freedom, they kept True updated routinely as they worked on a total of 40 stills and 34 animations; all in 4K resolution. More McVites videos. 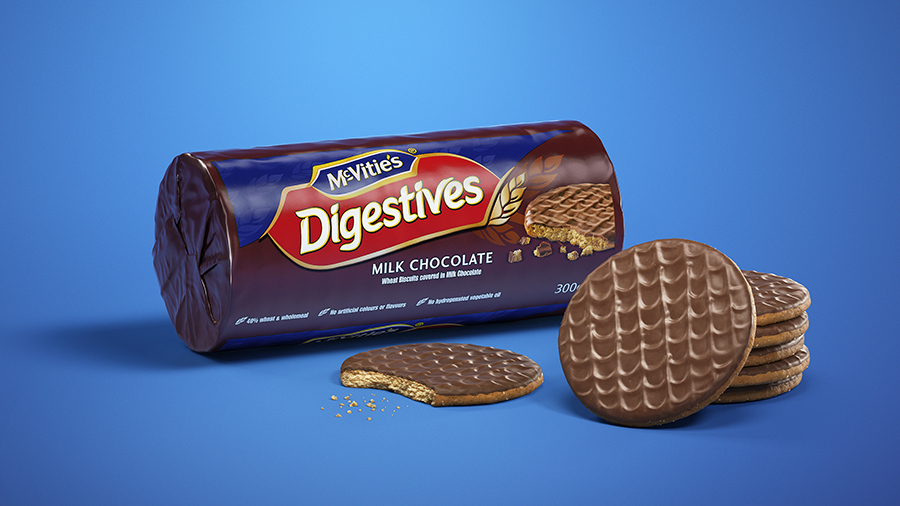 It wasn’t strange that True Sydney first asked Connor to retouch several images. Before teaching himself to use Cinema 4D in 2015, Connor worked as a photographic retoucher for nearly 20 years. He and Gorskikh launched Visual State after working together at a couple of other companies and realizing they made a good team. “I love that you can be the photographer and director when you work in 3D, especially if you’re doing the post on your own work; it’s complete end-to-end control,” Connor says.

After trying out a couple of different renderers, Visual State added Redshift to their pipeline in 2017 and Connor remembers instantly feeling like, “At last!” Now, he doesn’t even think about render times anymore, which was really helpful when they were rendering everything for the McVities project because at the same time, Connor’s wife was just days away from having the couple’s first child. “I was working from home, and I was so grateful to be able to do so many iterations of shading and lighting and know I was going to get great results quickly and easily.” 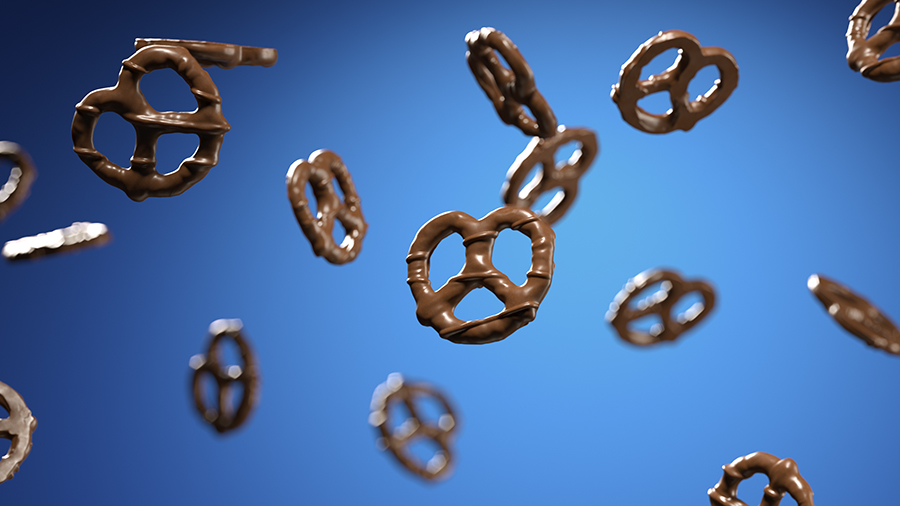 Animating Milk, Chocolate and Crumbling Biscuits
One of the most challenging parts of this project was ensuring things were done right from the start. Milk needed to splash properly. Chocolate needed to pour smoothly. Biscuits needed to snap and come apart just right. After going to the store to buy armloads of the McVities snacks that needed to be featured, Visual State measured and shot everything they needed for reference before blocking out the models and sculpting them in Zbrush 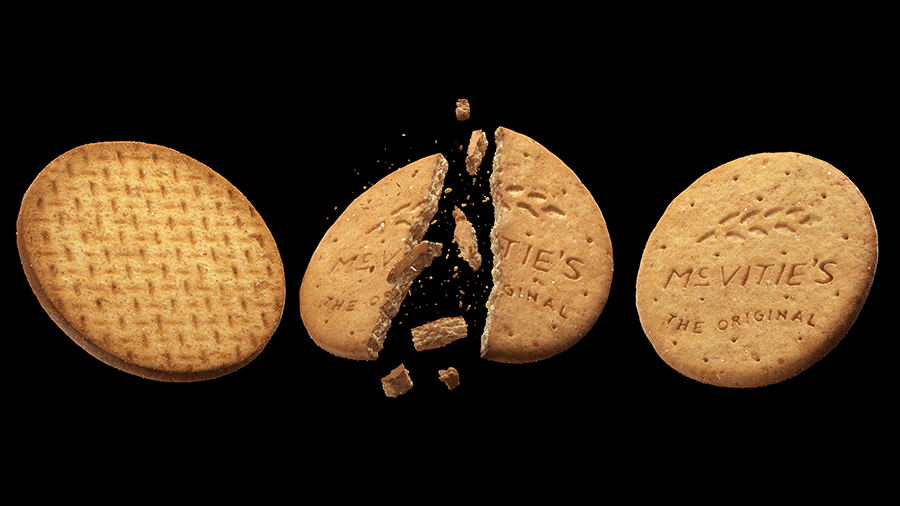 To keep everything organized for themselves and the client, they did several material studies to show what different types of biscuits looked like whole and broken. Cinema 4D’s Takes System came in handy for making sure various shots and project iterations could be easily shown to the client for comments. All of the shots were rendered as single multi-pass EXRs using Redshift’s AOV manager, which allowed Visual State to use custom AOVs to grab additional masks they might need to do things like enhance the edge of chocolate.

As they do with all of their projects, Visual State made sure that their workflow was non-destructive so that they could always go back to original models in their unbroken state. “Some of the breaking and snapping shots were quite complicated in terms of how we should set up modeling and sculpting,” Connor says, explaining that once a biscuit was snapped, all of the parts needed to be able to go seamlessly back together to create a whole biscuit again. 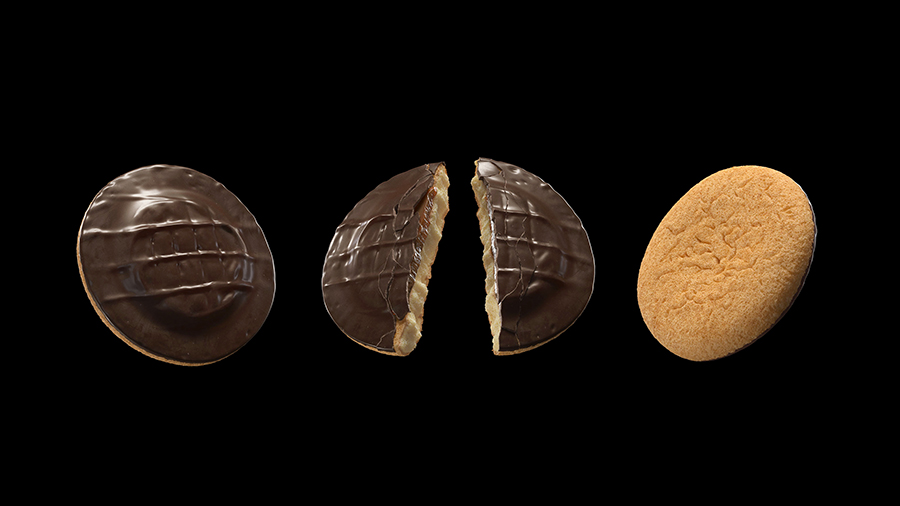 Scenes with chocolate were even more challenging because both the biscuit and the chocolate on top were fractured and needed to align perfectly. And then there were the times when the logo embossed on the biscuits were different, so the team had to be very organized to keep all versions of the biscuits in their original form. “We tried a lot of different techniques to get the various fractures to look realistic and natural so the client would approve them,” he says. 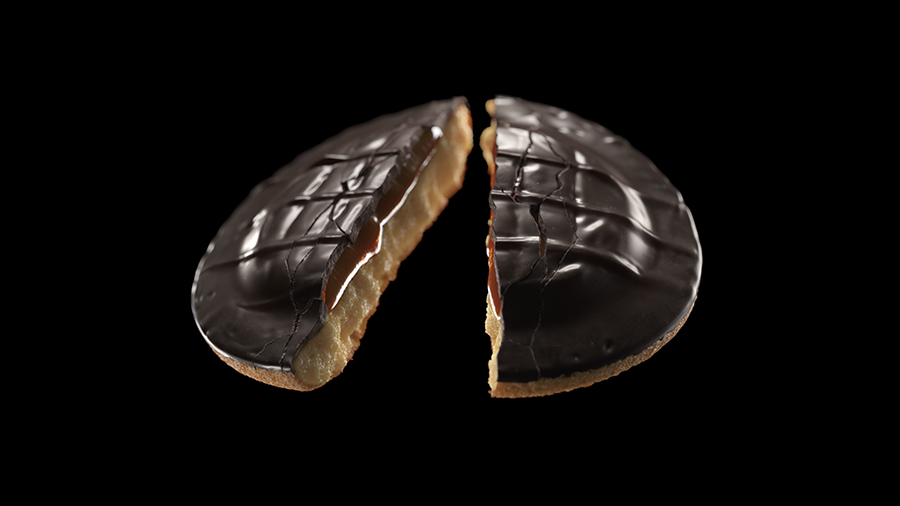 Redshift was particularly useful when they needed to make the biscuits look crumbly, Connor says. Cutaway shots showing the inside of the biscuits were difficult to make look right because of all of the thin, shelf-like layers. Although they sculpted a lot of information into the inside of the biscuits, Redshift was instrumental for adding that last bit of detail through displacement. “This was particularly difficult because the geometry couldn't move too much as we had salt crystals and particles scattered across the surface to further enhance the crumbly texture,” he recalls.

To get the milk and chocolate simulations right, Visual State reached out to US-based Houdini artist Dave Stewart. After a few initial conversations about how the biscuit needed to be positioned so the milk would hit it just right, Stewart got to work. “He really smashed it out of the park, and it was great because Dave uses Redshift inside Houdini, so he understood some of the challenges we would have in terms of the UVs of the liquid,” Connor says.

Like the chocolate, for example, which needed to have tiny granules inside it just like real-life liquid chocolate would. “Dave made sure we captured all of the UV data we needed to be able to put the particles in there,” he continues. “It was a lifesaver because we hadn’t thought of that. Dave simply output the simulations as Redshift proxies and we applied our chocolate shader, referencing the UV position, so that our chocolate particles moved with the geometry.”

As Connor imported Stewart’s work from Houdini into Cinema 4D, he had some technical questions and got in touch with Redshift’s development team, who helped him sort things out quickly. “I really appreciate how Redshift let us break with reality and push things the way we wanted to,” Connor says. “We were working with real products, but we art directed this differently because of Redshift. If this had been photography, we would have had to retouch the shit out of this to get the same result.”