Everyone likes a tale about an underdog; perhaps a former hero who must fight their way back from oblivion. And that’s just the kind of story Ritzy Animation tells in their short film, Red. Released last Christmas, the film opens with Rudolph the Red-Nosed Reindeer slumped in a chair in his trailer watching a documentary about how his life went off the rails years ago. Enraged, he puts down his booze and cigarettes and embarks on a Rocky-style comeback packed with plenty of 80’s-inspired workout montages and carrot smoothies.

Two years in the making, the film was both a promotional piece and homage to the ‘80s, and was created using a combination of Maya, ZBrush, After Effects and Redshift. “We went for the 1980’s feel because sport montages, a la the movie Rocky, were all set to fast-paced ballads during that time,” says Charlie Batho, who co-founded the London-based studio with Dan Edgley in 2017. “We are also huge fans of films from that era and it was a good excuse to re-watch some of our favorite oldies for reference.”

Combining the Right Tools
Batho and Edgley met when they were both working at Blue Zoo Animation Studio. Often paired up on projects, they both dreamed of starting their own company. Eventually, they quit their jobs and began working out of Edgley’s spare room, living off beans on toast as they worked to establish themselves with clients. It didn’t take long before they were getting commissions, so after a year they moved to London and Ritzy Animation has been growing ever since. 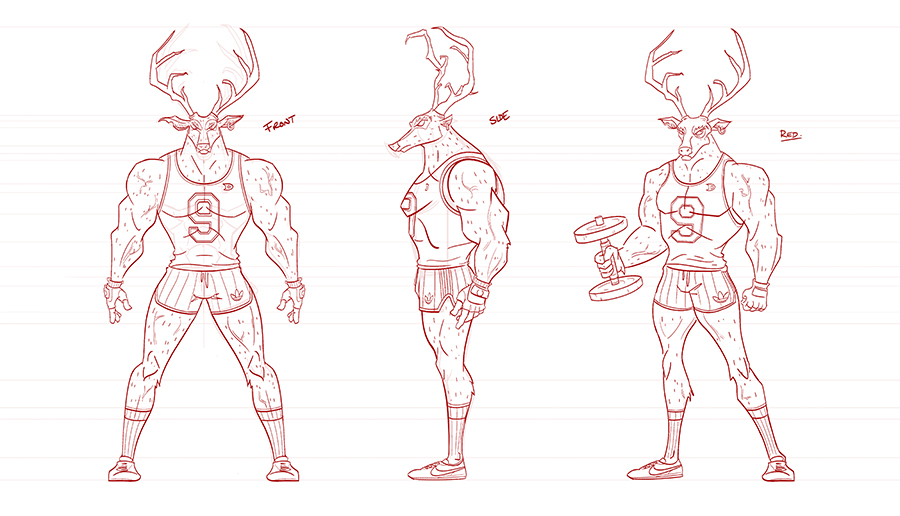 When conceiving of Red, Edgley and Batho chose Rudolph for the hero because they’re often drawn to a few key themes: sports, underdogs and flawed characters. “We wanted to show how someone at their lowest ebb could return to greatness,” Edgley explains. Working on Red in between other projects, the Ritzy team began by creating a library of research images so that briefs for their 3D modelers could be very specific. This strategy saved a lot of time because most things required just one iteration in Maya while also ensuring that everything felt like it was part of the same world.

The studio chose Redshift as their render engine primarily for its ease of use and speed. “We really like Redshift here because our iteration process is much quicker and that was crucial for this in-house project,” Batho says. “Redshift also causes the least number of issues
because it works well with Maya and XGen and has OCIO support and AOVs, which were all the features we needed for the film.”

While render passes are a common concept, Redshift’s AOV (Arbitrary Output Variables) system does the same thing but goes a bit further. Ritzy took particular advantage of the Puzzle Matte AOV in order to export a matte for each item of Rudolph’s clothing and other elements, so that color could be fine-tuned in post-production much more easily. To achieve the retro look they wanted, the team used Redshift’s OCIO color-management system, which allowed them to create their own color grading configurations.

Batho and Edgley opted to go with the existing color configuration because it “instantly gave our renders a more filmic feel,” Batho says. “It really brought out the richness in our textures and created a more realistic falloff with our lights. The difference was amazing when we first did the comparison, it was a real breakthrough.” 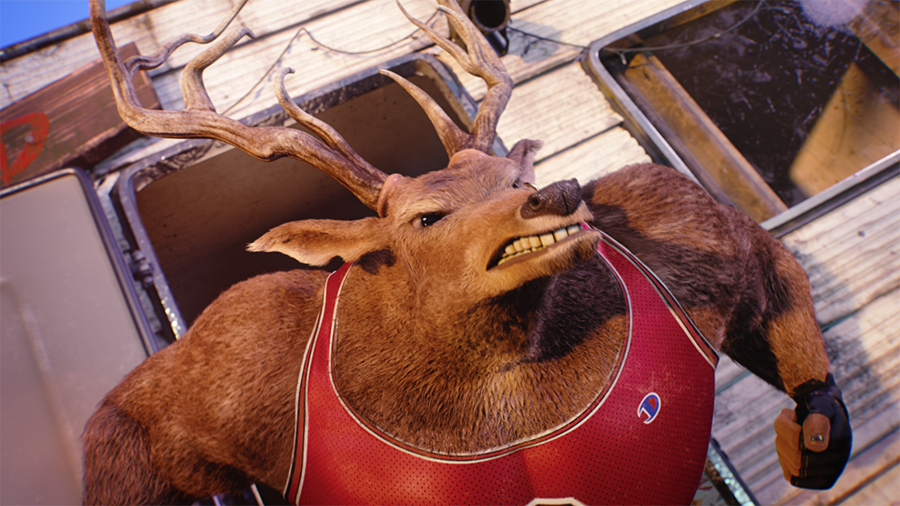 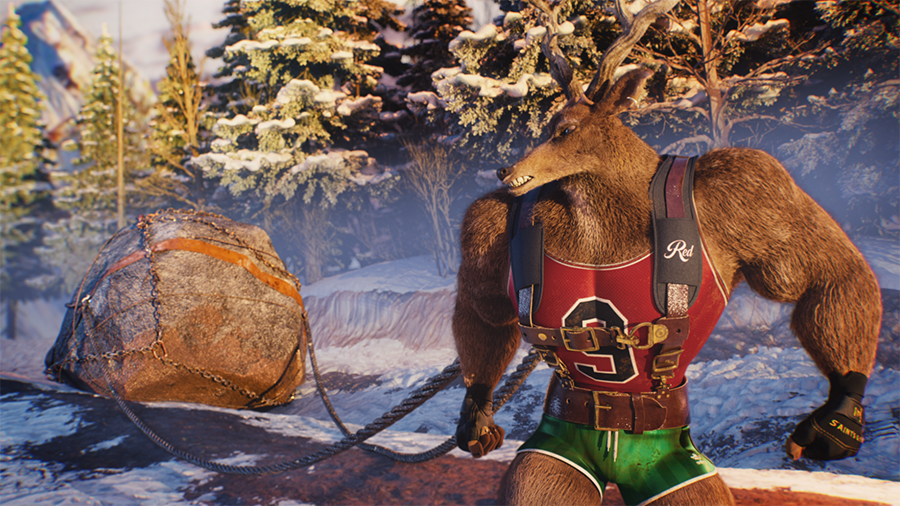 Perfecting All of the Details
The team used XGen to create Rudolph’s fur and after sorting out a number of challenges, they were able to assign color and other attributes to the fur using a Redshift node (Redshift Attribute Lookup) that could read the PTEX map and convert it into UV space. Other Redshift nodes were used to add more variations. “We learned to export the XGen hair as a Redshift proxy when testing the attributes of the RedshiftHair material, which saved us hours of lookdev as it reduced the render times by at least a third.”

Being able to write the tools to assign Redshift shaders to the scene geometry also saved time. “We have built up a library of tools over the years that aid with this kind of task,” Batho explains. “In the end, it was a case of combining and editing a few scripts together, which meant we could easily rebuild render files very quickly from animations.” 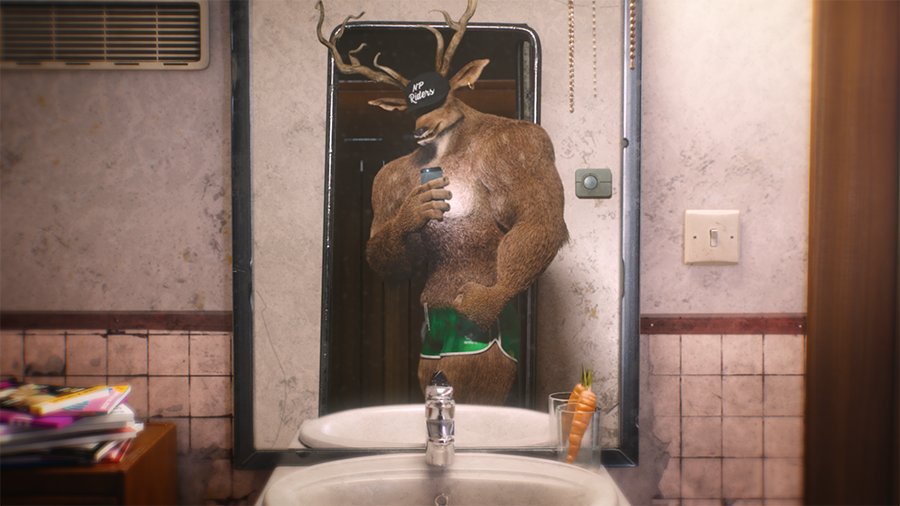 When it came to lighting, Ritzy kept Red’s indoor scenes simple by reducing the number of light sources to create a more subtle, subdued mood. Exterior lighting was also fairly simple, the detail being primarily in the models and textures. Most of the look was achieved with a single key light, using Redshift’s IPR to fine tune where the shadows were placed, and to quickly play with the color of the light to be more pink or yellow, depending on the time of day.

In all, about 12 artists were involved in the making of Red, which was rendered on Rity’s eight in-house workstations until full-quality renders of Rudolph’s fur began taking around 90 minutes per frame. At that point, the team decided to go with YellowDog for cloud rendering, cutting render times down to 20 minutes per frame and allowing them to render a number of frames concurrently.

It was an enormous in-house project that felt well worth the effort when the team watched the film premiere in the Ritzy Cinema in Brixton with friends and family. “We had a great time at the event, and it was incredible to see a packed cinema watching our creation,” Batho recalls. “Red will always be a project we’re incredibly proud of, and it was a fantastic experience from start to finish. We’re so grateful to everyone who made it what it is, and we’re already thinking about what we can make next!”

Duncan Evans is a UK-based writer and editor.