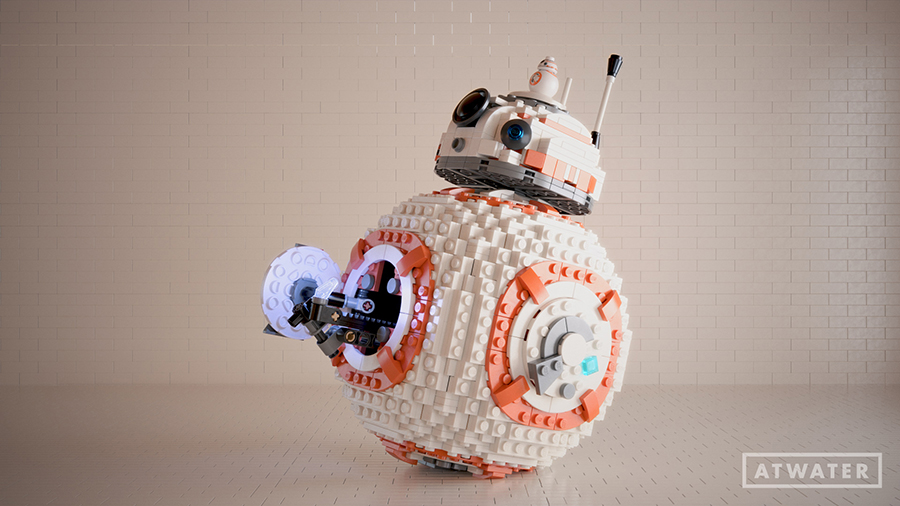 Since the early 1990s Atwater has been a go-to resource for LEGO’s creative production work; and now the veteran team is enjoying some much deserved industry recognition as it recently won a Silver and two Bronze awards in the 2018 Hatch Awards for its mini movies.

Despite the timelines being challenging, the team knew that they could rely on Redshift to produce the clean results they needed: “There wasn’t a moment where getting the rendering itself done on time was a concern,” says Dan, “which is really important when you’re dealing with so many moving parts in a production.”

The company was introduced to Redshift by a colleague back in 2014 and has never looked back, Dan explains: “At the time we were using mostly a CPU-based renderer during its transition period to becoming a ray-traced renderer and were having a quite a few issues.  We fell in love with Redshift almost immediately for its speed and ease of use.”

Founded in 1992 in Springfield Massachusetts by Joey Pellegrino, as a commercial photography studio, Atwater is comprised of nine full-time staff, and the company draws on its extensive network of freelance staff for large projects. LEGO has been a key client since the early days of Atwater, where the original work was product photography for the LEGO Mania Magazine; since then the relationship has blossomed into a long and fruitful one.

“Our core values are very important to us,” says Tim Palmioli, director of operations. “When you work with Atwater you become a part of our extended family. This has helped us form a number of meaningful long-term relationships, and the variety of services we offer have made us a go-to resource for creative production, especially for LEGO.’

When producing the LEGO mini movies, the team deals with a huge number of objects. Generally speaking, most 3D models are just a shell representing an object, but “with LEGO bricks you’re dealing with layers upon layers of complex structures and you can’t really remove many bricks without affecting the final look in some way,” Dan explains. “We actually rendered the most LEGO bricks we’ve ever done in another piece that we created earlier this year. In the early shot where the X-wings enter the trench there are 30.4 million LEGO bricks, totalling over 75.9 billion polygons. Redshift was able to handle this incredibly well.” 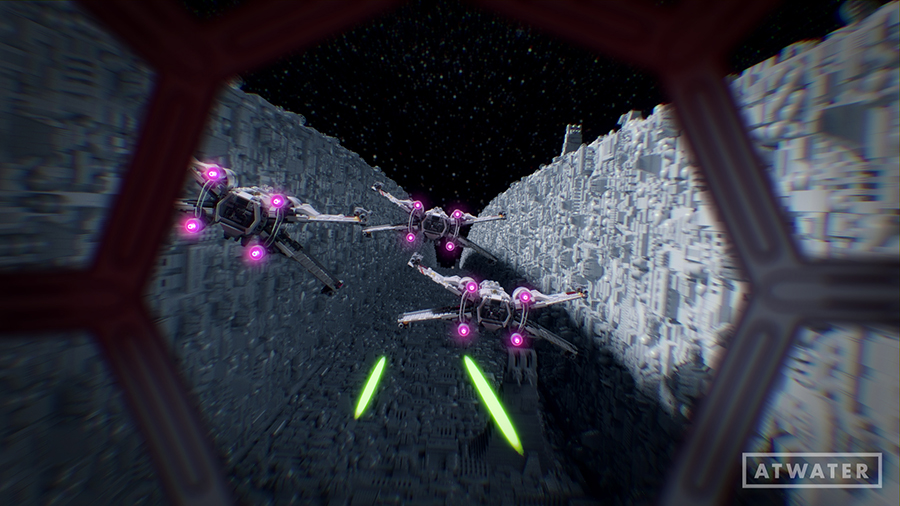 You can use the following link to watch this brick-filled project via YouTube.

It is not just the geometry of LEGO which poses unique challenges for Atwater and Redshift. LEGO’s brand identity means the team has to adhere to strict restrictions on how the LEGO figures are depicted. This is something that the Atwater team is well versed in, as Dan explains: “Having worked with LEGO as much as we have, their extensive guidelines have become second nature to the team. Some of the more particular guidelines pertain to how minifigures are allowed to move. There’s also a good amount of scrutiny in terms of how their toys’ colors and textural qualities are portrayed.”

Redshift’s easy-to-use, but powerful, shader system enables the team to get the precise results needed to showcase LEGO’s iconic plastic, and recent updates to Redshift meant that Atwater saved time at the rendering stage. “The plastic material itself is fairly complex,” Dan explains. “We updated our materials just this year to use the fairly new Single Scattering feature on the Redshift Material, on top of that we’re able to layer in Multi-Scattering, as well as full reflections. Trying to achieve that with other renderers, you’re going to sacrifice a lot of render time in order to achieve a clean result.”

The LEGO guidelines may seem restrictive to some, but for Atwater they are a key part of the creative process: “Anytime there are restrictions it helps force us to creatively think outside of the box,” Dan explains. “Some of the more challenging restrictions are actually from the product we’re trying to bring to life. An example of that would be in the ‘Star Wars Choose your Co-Pilot: Hot Dog Man’: The hounds weren’t allowed to deform because the toy itself can’t bend its legs. This forced us to get into the mind of a kid and animate them as if a kid was playing with them, and in the end this made the scene funnier.”

The minifigures also presented unique challenges for the team, who really had to up their storytelling and animation skills to get the narrative across. “The LEGO minifigure itself is quite limited pose-wise,” says Dan. “This pushes our animation team to make bigger, sillier moves, as opposed to relying so heavily on poses to show an action.”

“Because LEGO is a global brand, localizing content for every language would be a huge hurdle, therefore, the majority of projects we do with them contain no dialogue or narration. This continually pushes our storytelling and acting,” he continues.

Making the most of Redshift

Even though Atwater has worked with Redshift for a long time, Dan and the team still find opportunities to try new techniques. For example, in ‘Choose your Co-Pilot: Corn Cob Guy’, Atwater used its own photogrammetry to create the popcorn; it was the first time the team had done this and they were amazed at how quickly they were able to bring in a real-world object and make it look the way they wanted in the Redshift rendering environment. 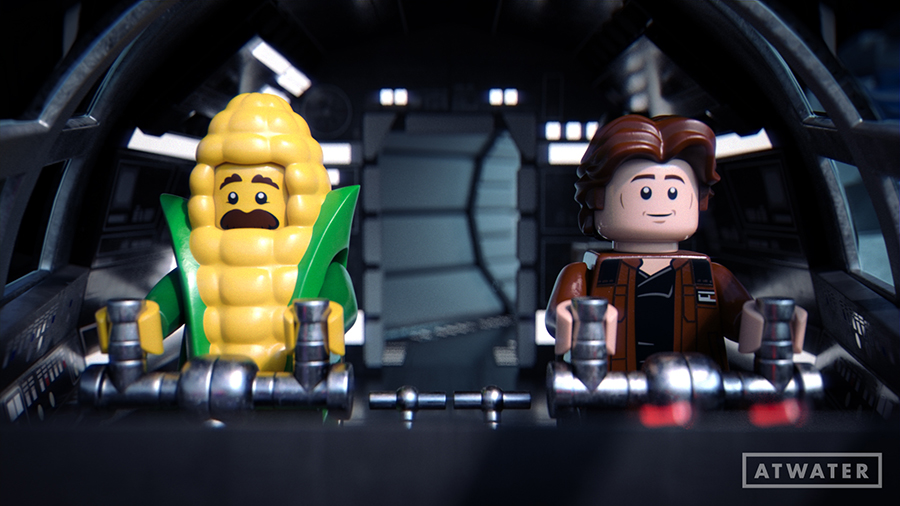 Redshift’s ever-expanding support for industry-standard toolsets is integrated into the Atwater pipeline, which uses Autodesk Maya as its backbone. “The implementation of OpenVDB in Redshift has really helped us integrate our FX much better than previously. It really helps having illumination coming from an explosion or having smoke cast shadows and appear in reflections. Previously, it took a lot more compositing work to achieve those effects and they never looked quite as good because of it.”

The Atwater team know that Redshift will continue to deliver more and are eager to use the new features they expect have been implemented in the upcoming release: “We’re excited to see what speed improvements happen with RTX support and we’re always in the market for more interactivity with IPR sessions. There are also the little surprise features we get within random builds throughout the year; those are fun treats to look forward to.”

The great thing about having a long-term relationship with a client like LEGO is that it often leads to more creative opportunities. “It’s always fun to see the little bits of humor that the animation team finesses into these projects,” Dan reminisces. “One in particular is in ‘Choose Your Co-Pilot: Porg’, If you look closely there are more and more white LEGO pieces stuck on the floor and walls as the animation progresses. I’ll leave the rest up to your imagination…” 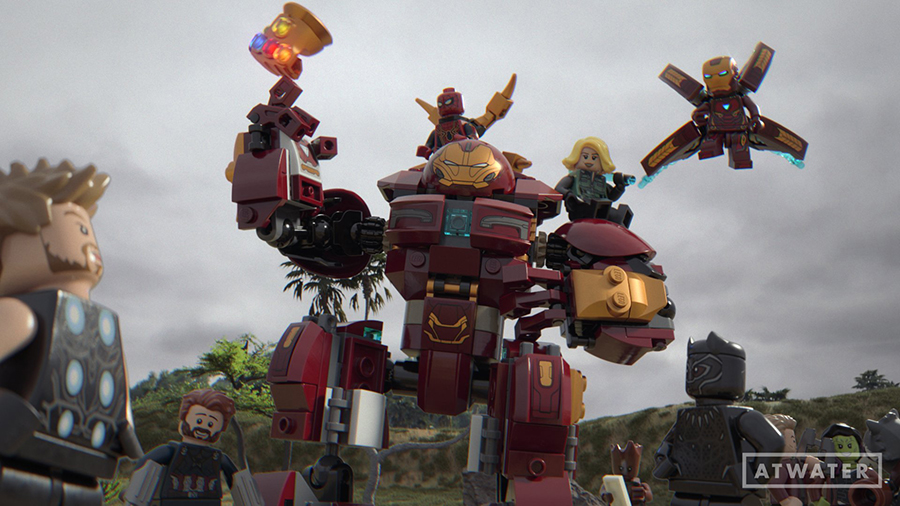 In cultivating this special relationship, Atwater has seen its work rewarded, with industry recognition, a happy client and most importantly a successful engagement with the audience. “Seeing our projects out in the world is always a treat,” says Dan. “A mini movie we produced this year, ‘The Gauntlet - LEGO Marvel Super Heroes’, was extremely well received and helped push our total views on the LEGO YouTube channel to over 200 million. Those metrics are always fun to see.”

You can watch ‘The Gauntlet - LEGO Marvel Super Heroes’ here:

And here’s a great behind the scenes video of that piece here: