The Panics describe their cinematic dive into creativity’s dark side.

Founded in 1998, The Panics is a director-driven commercial film production company based in Amsterdam, Netherlands. The studio’s international team of directors, producers, filmmakers, designers and artists consistently creates award-winning films across many genres, and their extended family of companies includes The Panics Film (feature, drama, episodic and documentary); Post Panic (in-house design/CG/VFX); House of Panic (their label for collaborations); and Panic Room, the studio’s biannual creative festival celebrating inspiration.

House of Panic Director Kim Taylor used Redshift, C4D, Maya and ZBrush to create the titles for the event’s 18th edition this year. Called Rebirth, the title sequence “delves deep into what twisted horrors humankind is capable of bringing to life once he learns to manipulate nature to his depraved will,” he says.

We asked Taylor to tell us more about The Panics, the Panic Room event and the making of the Rebirth titles.

What are The Panics and the Panic Room event all about?
Taylor: The Panics creative approach is to allow our passion for creativity and craftsmanship to drive the quality of our work, always aiming for excellence and an original voice. Inspiration is a big part of that, and Panic Room is an invitation-only event we hold at our studio twice a year. We invite prominent creatives to come speak in front of an audience of kindred creative souls. The idea is to share your inspiration, not your portfolio, and directors, graphic designers, musicians, photographers and many more take the stage.

Where did the idea behind Rebirth come from?
Taylor: I was offered the chance to create some titles with a totally open brief, and I became interested in the concept of ‘a creative incubator’ where ideas can grow. In another sense, I also wanted this piece to symbolize the rebirth of our studio as we recently rebranded from PostPanic to The Panics.

After settling on the concept, I let my mind wander for a bit while developing the details. The creepy laboratory setting is a really ripe environment to explore creating a ton of atmosphere, strange creatures, as well as cool apparatus and machines. A lot of my concept development consisted of collecting vast amounts of lab-themed reference images and discovering plenty of totally obscure tools and devices I would never have come across unless I decided to get a science degree. 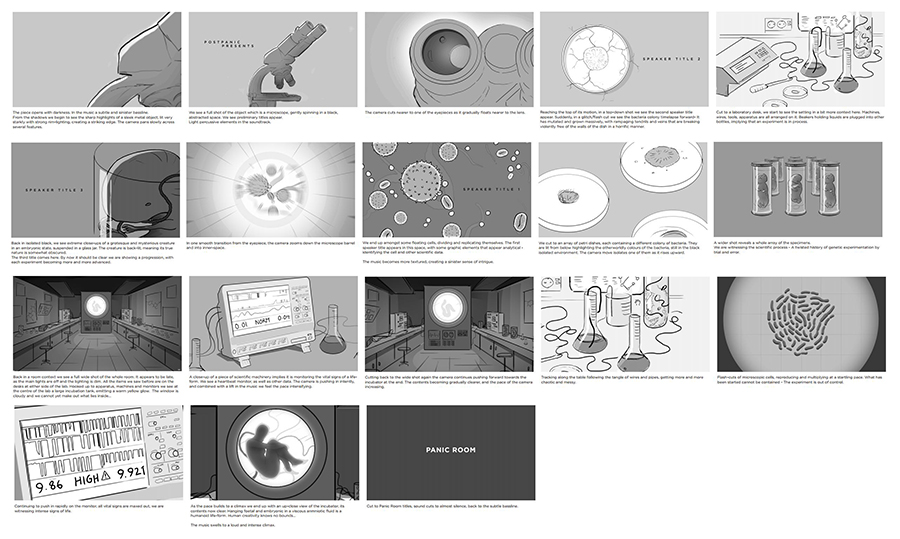 My goal was to spin a short, cinematic tale solely by way of the environment and the objects found within. Given my personal taste for sci-fi/horror, the path took a predictably pretty dark turn. In brief: someone in a rogue laboratory is doing genetic experiments to create lab-grown cyborg alien babies, and the nascent creations spiral out of control and mutate with terrifying results!

Tell us more about your toolset and pipeline?
The project was created at its core using Cinema 4D and Redshift. Starting from a rough sketch, I began modeling in Cinema 4D and using Redshift, usually in tandem with Photoshop. So I was able to quickly sketch out and graft together new ideas as the look began to take shape. I’ve got a PC system with twin 1080Ti GPUs, which means I can pump out IPR previews in no time and use the snapshot feature to A/B in-between options.

Once the process got far enough along, I began transferring the workflow into Nuke using Redshift AOVs, which let me dive deeper into compositing. Being able to fully manipulate volumetric lighting, boost specularity or tweak SSS passes gave me a ton of control in the compositing stage and that really helped enhance the final result.

How long have you been using Redshift, and how do you find it helpful?
I’ve been using Redshift for about two years and it has totally revolutionized the way that I approach look development. Now, I can convert ideas into visuals extremely quickly, leaving more time experimentation and I find that particularly critical since you have to act quickly on creative impulses. Having Redshift and a pair of fast GPUs just makes you feel much more connected to what you’re trying to create.

Describe your process for creating those beautifully creepy alien babies?
I brought in Karolis Jurkstaitis, a digital sculptor at the studio, to create those. At the time I didn’t really envisage what the brief’s ‘stillborn-mutant-alien fetus’ was going to involve. But it’s safe to say that the reference images Karolis found weren’t something you’d like to see right before lunch.

Redshift has been useful in the studio, which is home to several different types of 3D artists, including some, like me, who use Cinema 4D and others who are Maya users. Karolis worked with ZBrush and Maya to create the aliens, and Redshift proxy files were helpful because we were able to pass WIP elements of the scene with lighting setups and elements back and forth. We wouldn’t have had that compatibility if we’d simply used our native programs. The look of the alien babies depended heavily on sub-surface scattering to create the lurid, translucent flesh. Combining a base SSS shader with additional maps to affect color, specularity and roughness really helped to add extra detail.

What did you enjoy most about the chance to create Rebirth?
While open briefs never fail to scare the shit out of me, it was immeasurably fun to be able to immerse myself in the world I was creating without any limitations. I will say that getting elbow deep into details makes you realize how much thought and effort goes into filmmaking or animation where seemingly invisible elements actually need to be carefully thought through. It’s funny how easily a certain choice can make or break your scene.

Is there a type of film project you’d love to do?
I’m as much a designer as I am a 3D guy, which is why title sequences push my buttons so much. It’s an often-overlooked art form that’s been developing in really exciting ways recently. So it’s really my ambition to be more involved with projects like this that intertwine storytelling with design.

Helena Corvin-Swahn is a writer and editor based in the UK.