How Garmin International used Redshift to make a ‘MARQ™’

As a pioneer of GPS, Garmin International has been at the cutting edge of technology since its inception. Recently this has involved the creation of ground-breaking smartwatches which has culminated in the launch of the MARQ™ Collection, a series of aspirational tool watches with models that each focus on a core product sector for Garmin - Athlete, Adventurer, Captain, Aviator and Driver.

We spoke to Senior Motion Designer at Garmin International, Jono Gaughan to find out how Redshift was crucial to the success of these spots.

“Our team cranks out over a hundred videos every year, a few dozen of which are pure motion pieces,” Jono explained. “We typically produce four to five big campaigns for our ‘A-level launch’ products such as vivoactive®, fénix®, and Garmin Drive™. These campaigns always require motion-end tags, as well as various VFX and animated supers.”

“Aside from the big campaigns, we produce what we call ‘feature-benefit’ videos for just about every new product that we come out with,” Jono continued. “These tend to be full motion pieces and are a lot of fun to work on. These are typically an opportunity for us to spread our wings and try new techniques, styles, softwares, etc. that we have wanted to explore.”

A new solution with Redshift

For the MARQ™ Collection, Jono and the team wanted to find an alternative render solution to their native renderer. “We were looking to up our render game,” he said, “so I had done a ton of research on the new and old engines out there. I talked to several well-respected designers at NAB and SIGGRAPH to take all things into consideration.”

The team experimented with other GPU-rendering options that were available for Cinema 4D, but after some experimentation, Jono felt that only Redshift was up to the task. “After trying out the others, I found Redshift to be the most powerful, gave the best results, and the least limitations,” he said.

”Certain renderers would produce excellent results, but couldn’t support certain multi-passes (AOVs) that we needed for compositing, object exclusions, etc,” he continued. “Also, some seemed unstable and would lock up our machines if scenes started getting too heavy.”

The stability of Redshift, especially when combined with the reliability of Maxon’s Cinema 4D, really impressed Jono: “I’ve never really found a breaking-point with Redshift,” he said. “It seems to handle just about everything I throw at it. Ultimately, Redshift did everything we needed it to do, seamlessly, and without a hitch.” 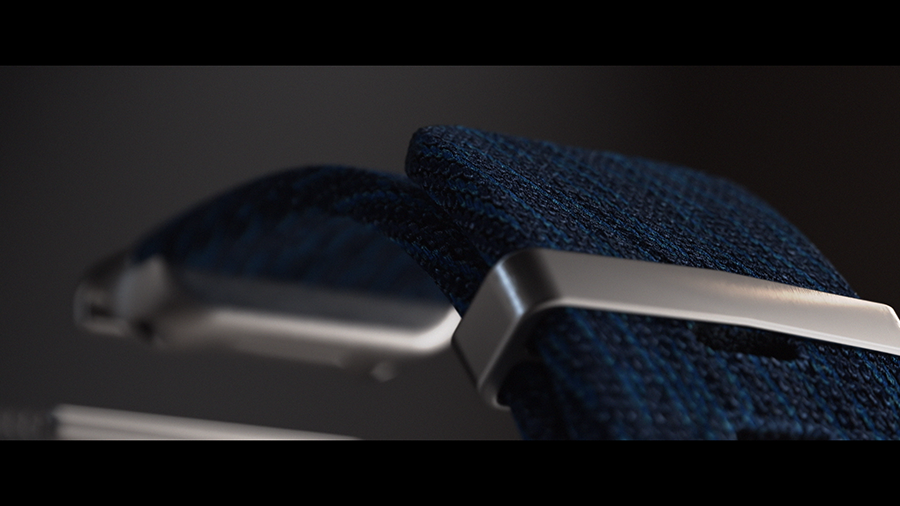 The inherent speed of GPU rendering and the real-time previews generated are always impressive when switching from legacy CPU options, but once Jono got into Redshift and started messing around with it, he found even more bonuses.

“The material node editor allows me to make my textures as detailed as I want,” he said, “which eliminates a lot of compositing work. The dome light allows me to use an HDRI without Global Illumination, which looks amazing and is a huge time saver.”

“I found that I was able to produce really great-looking renders in Redshift in a fraction of the time that it used to take me,” he continued. “The real-time feedback from the Redshift Render View allows me to quickly hone in on every aspect of texturing, lighting, and so on, without having to wait for a render. This feedback has allowed me to start incorporating things like baked-in depth of field and motion blur, which I was never able to do before.”

Redshift’s accuracy and precision were an ideal fit for Garmin’s brief, as Jono outlined: “For MARQ™ specifically, this is the highest-end watch that we have ever created, and we really wanted to focus on the quality of the materials and craftsmanship.”

To do this, the team needed to get macro shots of the device, but since the devices weren’t fully complete at the time of the shoot, they weren’t able to capture the shots practically. “This meant we needed to create CG renders,” Jono explained. “Redshift offered the detailed features and settings we needed to be able to pull these shots off.” 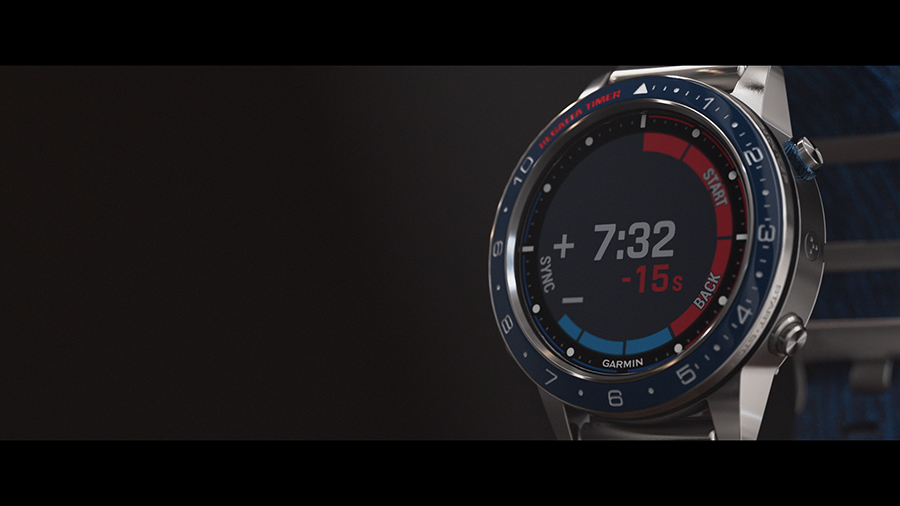 Redshift’s excellent support for compositing workflows was also a contributing factor in the success of the MARQ™ Collection videos. Jono describes his former compositing workflow and how Redshift had improved it: “When I was using my previous renderer, I got in the habit of kicking out a dozen multi-passes to fine-tune textures and lighting in compositing. With Redshift, I’m able to get everything near perfect, right in Cinema 4D, which has almost eliminated the need for compositing.”

“We still need mattes for the devices so that we can add text and screens,” he continued. “This is a necessary step for us because all of our videos get packaged up and sent out to be translated into a dozen different languages.”

As Jono likes the safety-net of having control of certain things post-render though, he usually adds Redshift AOVs, such as Cryptomatte and Depth matte just in case.

“Cryptomatte has been an amazing addition to our process, eliminating the need for multiple object passes,” he said.

“We often use Puzzle matte instead of Cryptomatte, if we only need a few mattes. It’s a little less clunky/slow in AE,” he explained. “Depth matte comes in handy if we’re compositing things into 3D space in AE. I also often use it to add atmospheric depth.”

Jono also highlights Redshift’s layered EXR support, that he found particularly useful for this project: “This was my first time using multi-layer EXR files as well,” he said. “This was really handy for keeping the number of files low and tidy. Being able to just import one sequence instead of a dozen was really convenient.” 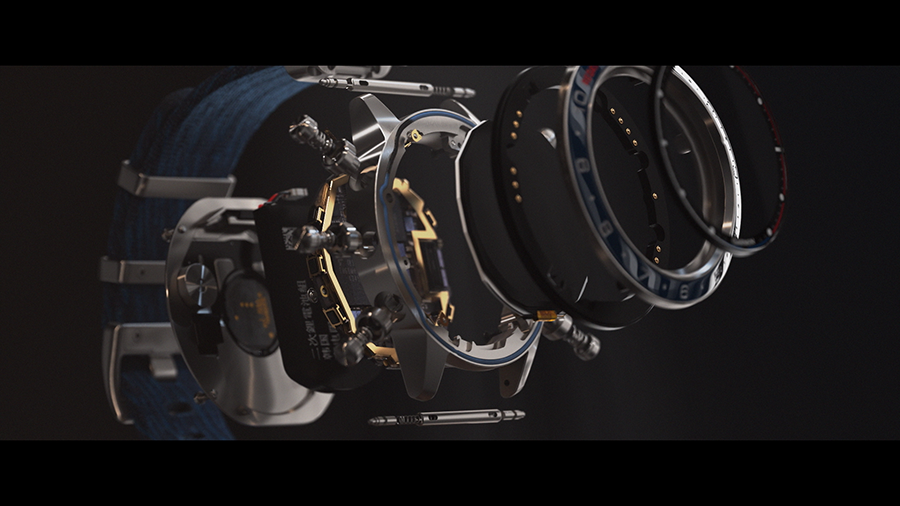 Working with CAD data has been an issue for digital content creation software in the past, as Jono explained: “Previously we would need to convert our Industrial Design department’s CAD models to STEP or IGS, then we’d use Rhino 3D to convert to clean(ish) OBJ meshes. Cinema 4D R20’s new CAD importer has been another game changer for us.”

“We can import the CAD files directly, which eliminated an otherwise unnecessary conversion and often resulted in messy meshes,” he continued. “Redshift’s ‘round corners’ node, as well as the advanced displacement tessellation, has made those digital-looking CAD models look way more organic.” 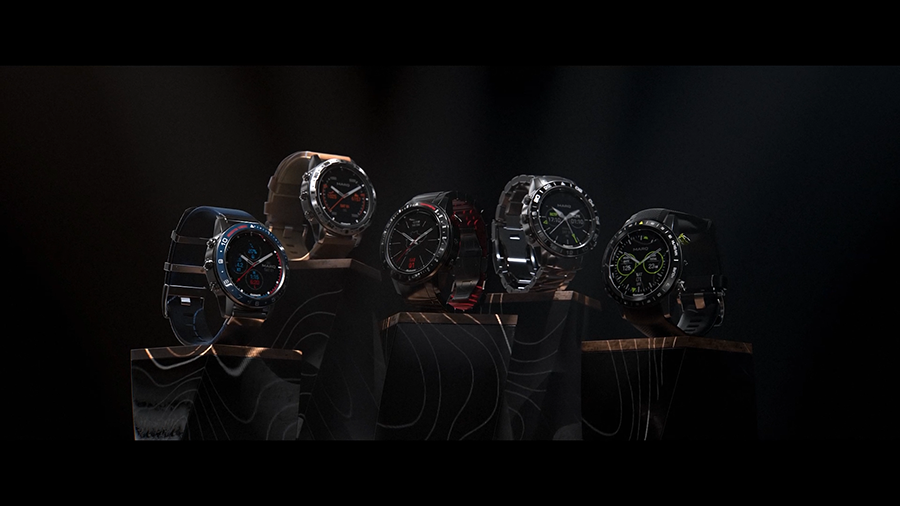 Redshift’s speed and the quality of output were the biggest advantages on this project, and enabled the team to push themselves further. “Using Redshift has definitely allowed us to spend more time on other aspects of production or honing in on render quality,” said Jono.

He added: “Without a doubt, we’re able to create better-looking renders than before. Not only has our render quality improved because of Redshift, but it has allowed us to build more complex scenes and simulations as a result.”

This improvement in quality resulted in the kind of feedback you rarely get from clients: “I will never forget the first review we had for the MARQ™ story video,” Jono reminisced. “After the video had played, one of the Creative Directors said, ‘Wait…’ then there was a long pause (my stomach sank), ‘…those were renders?’. The next several reviews following that one had similar reactions, which was such a great feeling.”

“When I first discovered Redshift, I was like a kid in a candy store,” Jono said. “Every new feature I stumbled upon was so much fun to explore; I was immediately hooked. I still get giddy when I tell people why I love Redshift.”