London-based production studio, INK has worked with Honda for the last four years on a series of projects related to the car maker’s vision for a cleaner future. Recently, for the 2019 Frankfurt International Motor Show, they created a CG animation in which several Honda e cars travel through a futuristic cityscape, showcasing three different charging solutions: Honda’s home charger; Ubitricity, a residential, on-street charger; and Honda’s conceptual, bi-directional system that charges electric vehicles via a smart city-wide power grid.

With several key messages to communicate, and a challenging deadline, INK’s animation team opted to use Cinema 4D and Redshift over their usual pipeline tools to create an energetic, animated sequence. We talked with INK’s Creative Director Miles Christensen and Senior Motion Graphics Artist Kieran Gee-Finch to get a behind-the-scenes look at the Honda animation and find out how the award-winning studio approaches projects creatively.

Tell me about INK and how your team works on the wide variety of things you do.
Miles Christensen: INK works with technology brands to help bring ambitious ideas to life. My role as creative director has been to develop a design-led animation department. The majority of the team uses 3ds Max and V-Ray, but the studio is now creating more design-led animation, so we’ve started integrating Cinema 4D and Redshift. Our approach varies from project to project, but we almost always begin with collaborative discussions with the client, which helps us understand the ideas they want to communicate to their audience. Then, we work as a team to discover the best way to communicate that message.

For this project, Honda gave us some flexibility, but they wanted to ensure that we communicated clearly the three different charging options for their range of electric vehicles. I worked as a director in the game industry before joining INK, and sometimes the scripts we’d have to create visuals for could be dry, so you’d have to get creative with storytelling. Honda left the narrative of the film up to us, knowing we could deliver something that would not only be engaging, but also communicate the key messages clearly. It helped that we’d just done a film for them for the launch of the Honda e-prototype in Geneva, so we had already established a lot of the visual language prior to starting this project.

So this was the first time your team has used C4D and Redshift for a project?
M.C.: Yes. Using Cinema and Redshift to take a project from start to finish was new for us. Kieran started working here a few months after I did, so we’re figuring out our process as we go. We usually do hand-drawn storyboards, but neither Kieran nor I are particularly good at drawing, so he decided to block everything out in Cinema 4D before we moved into the previz phase. 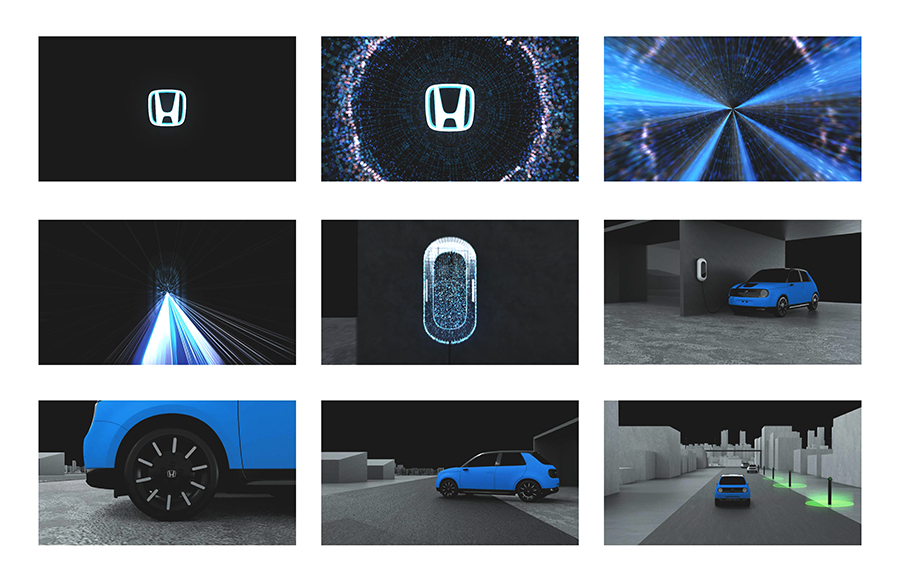 Kieran Gee-Finch: We only had a day or two to block out the entire sequence. Doing it in Cinema allowed me to work accurately with the car geometry and iterate quickly on storyboard frames while simultaneously creating style frame AOV’s for our compositor, Ruxi, to work with. This helped us establish a finished look quickly and get sign-off from the client faster. We also benefited when it came to blocking out animation as we already had a scene file ready to work with. Honda thought what we showed them was easier to digest than stylized drawings too.

M.C.: Redshift really helped us make the Honda car look great. I’ve always admired how technically proficient INK’s team is and I thought, if we can get a thumbs-up from them for how the car looks, we’re going to do this whole thing in C4D and Redshift, and that’s what happened.

Why did you opt for a sparse, white look for Honda city?
K.G.F: We actually went through a few iterations regarding that on a previous project. Some of them were darker, but Honda’s vision is a commitment to lower emissions and build a cleaner future. Miles and I have worked a lot in film and UI and that look is often techy, kind of Tron-like, which can look a bit overkill.

Was Redshift particularly helpful for certain scenes?
K.G.F.: Yes. In the film there’s a transition from day to night. Traditionally we might have blended two renders together to achieve that effect. Instead, we used Redshift’s material blender to fade between the two shader states giving us complete control over timings within one scene file. The scene file was initially quite heavy as the tunnel was made up of a lot of detailed geometry. To tackle that, we proxied a very small segment of the tunnel structure, and then cloned the proxy. Each clone was smaller than the previous one, giving the illusion of a very long, almost never-ending tunnel. This kept the scene file very light, with nearly all of the heavy lifting being done at render time. I used an isolated Redshift dome light & HDRI to light the car inside the tunnel, rotating it quickly to fake the light streak effects on the paint work of the car.

What was most challenging about this project?
M.C.: This whole thing was sort of a challenge because the previous film was made with Max and rendered in V-Ray, so we although we created all of the cameras for the previous film in Cinema, we didn’t texture and render everything. We were relying completely on C4D and Redshift for that this time. And with Redshift we were able to iterate and render so quickly, in nearly half the time, really, even though we had much higher levels of geometry than we did for the previous film.

K.G.F.: We were very much learning Redshift on this project, and we found it really intuitive and fun. Using Redshift proxies was invaluable to us because we were able to have one proxy file for the car, allowing us to make changes in a single file that fed into multiple scenes. The car data from Honda was very heavy, but by using a single proxy throughout, we were able to keep scene files small and save downtime. In the scene where the yellow car enters the city, we see several Hondas at once and our usual pipeline would have choked. With Redshift, our render times were only about 9 minutes per frame at 4K resolution, which was insanely fast considering the amount of geometry and reflections.

Written by Meleah Maynard, a writer and editor in Minneapolis, Minnesota.