Glassworks Amsterdam pulled at the heartstrings of German TV audiences this Christmas with “Christmas Doesn’t Need Much. Only Love”, an advert for Penny Markt which shows that Christmas can still be a time of wonder for a mother and her son, even when times are hard financially.

The Glassworks Amsterdam team created a mixed media pipeline for ‘Penny Xmas’, using practical models filmed on a soundstage combined with Redshift animated characters. The innovators at Glassworks developed a unique look and feel that fitted the tone of the piece, which was accompanied by a haunting cover of Elton John’s ‘Your Song’ by Josephine van Schaik.

We recently had a chance to speak to Glassworks Amsterdam’s three directors of ‘Penny Xmas’, Rüdiger Kaltenhäuser, Head of 3D / Director; Darren Macpherson, Senior 3D artist / VFX Supervisor & Director and Hugo Rodríguez Rodríguez, Art Director / Visual Developer, to discuss the workflow and creative inspiration behind the spot and how Redshift was vital to the project. 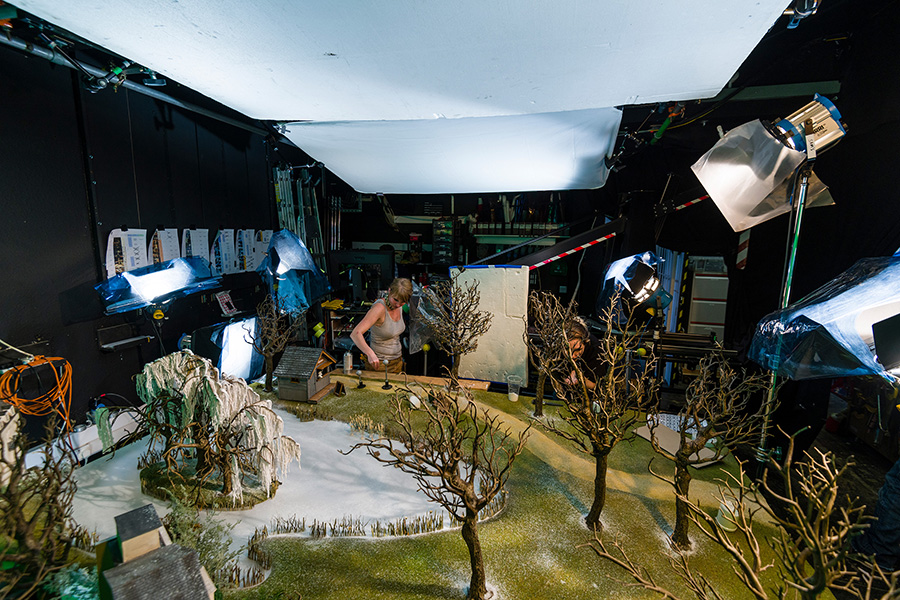 Glassworks Amsterdam had already developed a strong relationship with the commissioning agency Serviceplan, having previously worked with the company on spots for Capri-Sun and Torino. These experiences allowed the team at Glassworks Amsterdam to develop the unusual approach of the mixed media concept that they hoped would win them the work.

“I had previously worked on some projects in a similar kind of way, where it was miniature sets with CGI characters in it, and Hugo’s been interested in doing something with miniatures for a while,” Darren explained.

“Rüdiger is always looking for new and different creative ways of approaching work; we thought that we would take a different angle than just having it all CGI. “

“The birth of ‘Penny Xmas’ was very much in the concept art,” Darren continued. “Hugo created a little character of the boy and the client responded really well to that. We started to have a look at what was achievable and we felt that within the project timeline we would probably get richer and visually more interesting results by having a mixed medium approach.”

The first agency concept for the spot was live action, the team at Glassworks suggested animation as an alternative. Hugo elaborated: “We came with this mixed media approach and the client just fell in love with it.”

“There was such diversity and scope in the environments,” Darren continued, “we also felt that by creating miniatures we could get something tangible and tactile that just looks beautiful, and then you can integrate the CGI and marry the two mediums.” 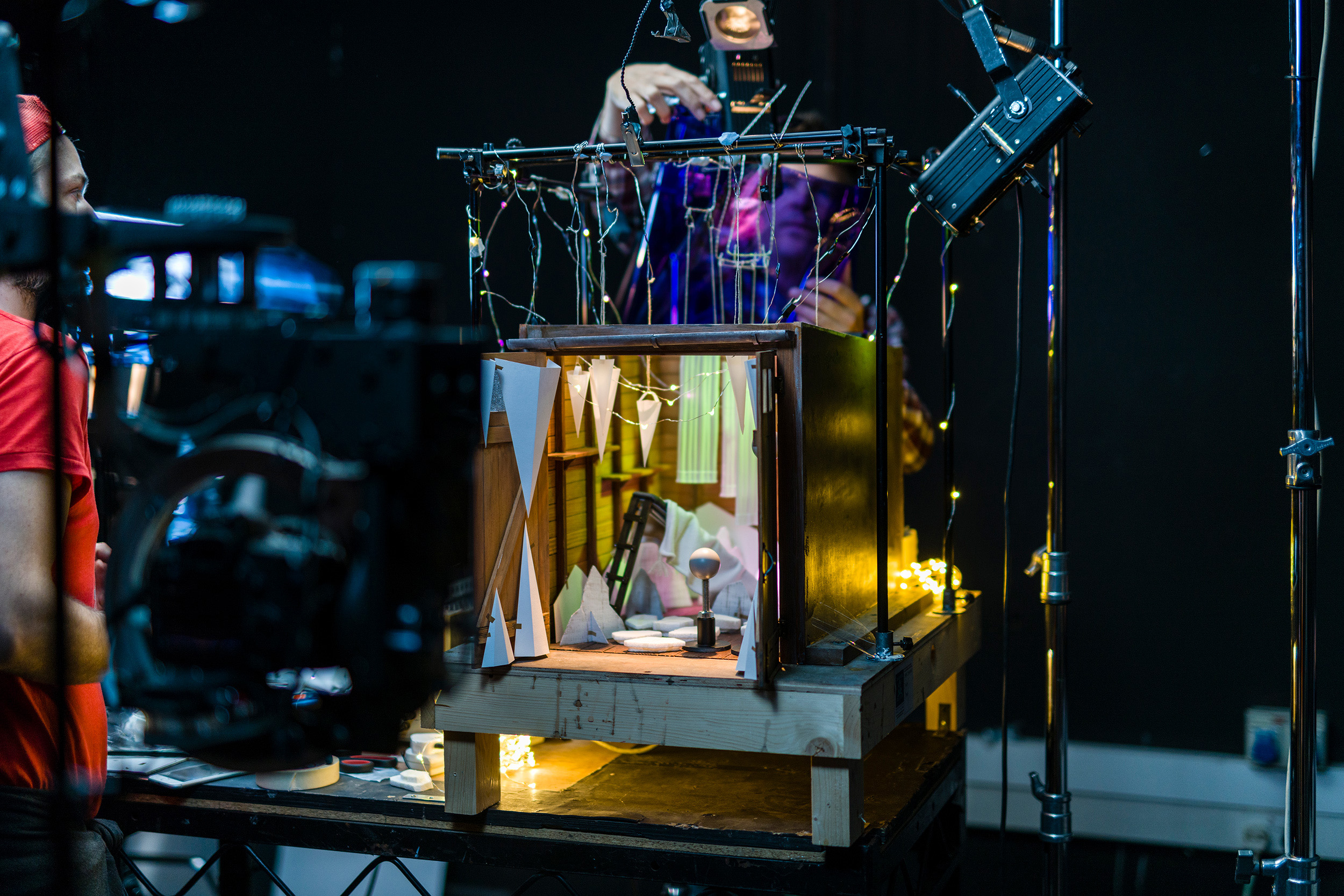 Even though Glassworks had been using Redshift for years with a dedicated GPU-server facility, the team felt that mixing live plates with CGI would be the best use of their resources.

They decided that the schedule would have been tough to meet with an all-CGI approach: “I think we probably could have manned up as the CGI was quite a lot more than what we were able to achieve in-house,” Darren admitted. “But, aesthetically, using the miniatures forces a different look and feel because you are locked to a live-action set. So once you've got that, everyone knows what they're getting.”

Using this approach and integrating the CGI with the sets was a familiar task for Glassworks Amsterdam: “We have a main background in doing photorealistic CGI integrated with live action,” said Rüdiger, “so it's not really a new thing for us. It's quite straightforward if you have the HDRi, the CGI lighting you need to do is very minimal.”

The project timeline was approximately five months, with the miniatures (which had been created by Clockwork Frog Films) being shot over two weeks at Second Home Studios in Birmingham in the U.K.

Historically, Glassworks Amsterdam was a SoftImage facility, which was one of the reasons that it had adopted Redshift early on. More recently, the VFX house has made the transition to Autodesk Maya and Side FX Houdini; Redshift’s licensing system of one license per machine rather than per host application made transitioning between Houdini and Maya simple.

“It has made a quantum leap in terms of being able to jump between the different applications,” Darren added. “It's like Rüdiger says, you get into it and it's not like, ‘Oh, this is foreign again’, it's all familiar and the integration between all of the applications seems to improve with each release. That's really helpful when you have multiple packages that you use.”

Without Redshift, the team wouldn’t have been able to augment the practical sets of ‘Penny Xmas’ quickly and easily, as Rüdiger explained: “We use CGI for the interaction objects like the table that the mother is sitting on. In the beginning, we decided to match the practical table as there are some close-up shots. The table model was fairly small, so when we were getting close with a big chunky SLR camera, sometimes the shots didn't come out properly; it was just easier to create it completely in CGI.” 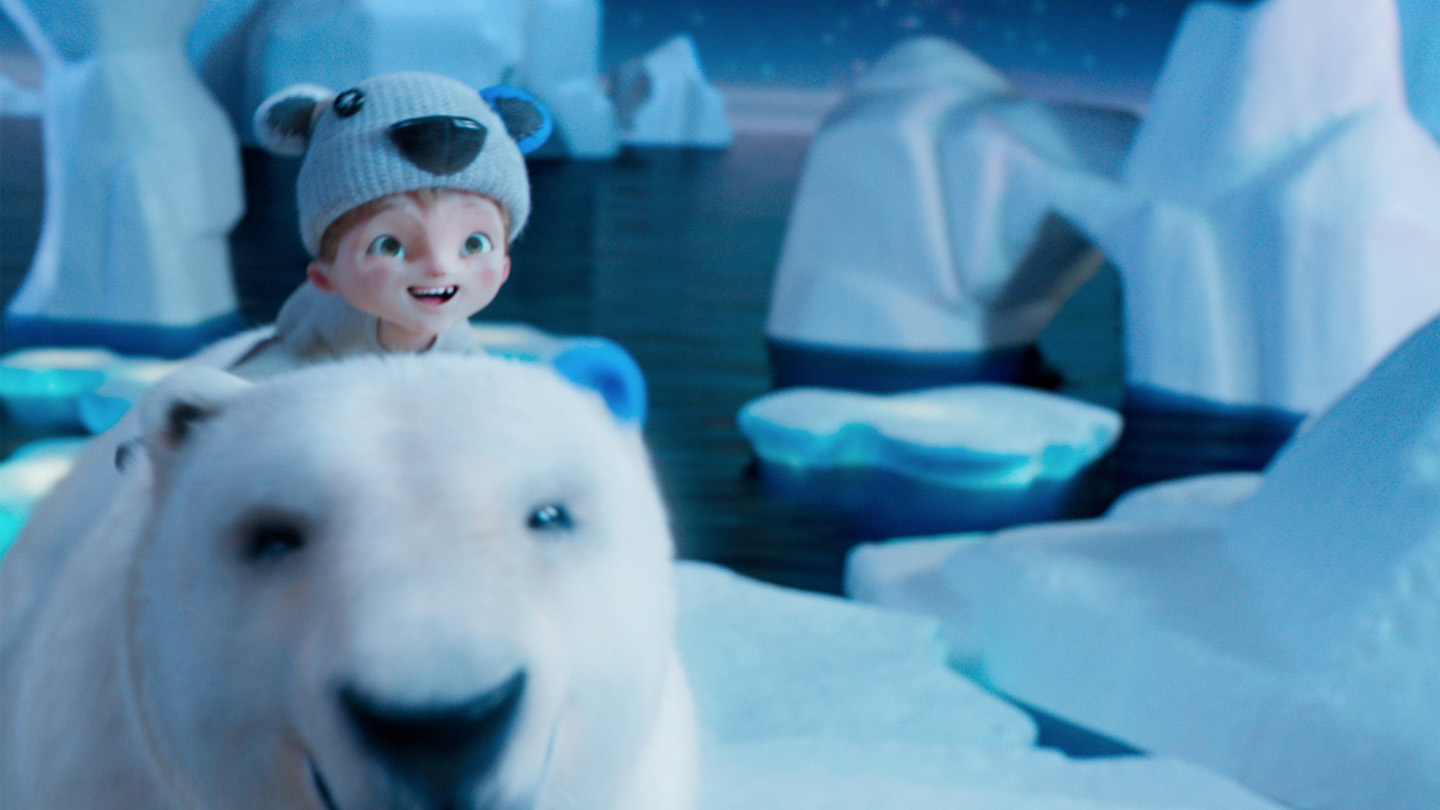 One of the most compelling scenes in the animation is when the polar bear appears and this is where Redshift’s speed and versatility really helped the team at Glassworks. “I just created a character with the feedback from the client, I was trying to do something more dramatic, aligned with the style of the mother. When they put the fur on the top of the bear it was like BOOM, done,” Hugo explained.

Darren elaborated on the visual design of the bear: “Hugo had created a design language in terms of what the characters feel like stylistically and the polar bear needed to align with the rest of the environments that we had designed for the characters. So it was a choice to have it feel like the bear was part of that whole world.”

Hair has always been an issue for CGI, but the team at Glassworks knew that it would not be an issue for them as they were confident with Redshift’s capabilities. “When we talked about the Polar bear and a hair system early on in the development of the project, it actually took us quite a while to discuss the style we were going for,” Rüdiger outlined.

“For a long time, one approach on the table was that we would not even use hair or hair systems, but use more of a clay look on all things with hair. It was not so much a technical decision, it was more of a stylistic choice. We were playing with the idea and also testing certain things in ZBrush, and in the end, we decided on real hair, because we just felt it would work with our real sets and real materials nicely.”

“At one point we just said, ‘What's the problem with real hair? Why don't we just do it with hair, that should be fine, right? Let's not make this a technical decision, let's make a conscious artistic decision’.”

“I think to that point, Redshift does allow you to do those things more easily now,” explained Darren. “A couple of years ago, the reaction to the mention of hair was, ‘Oh you can have something in the background that's a little bit furry if you want…but that will take five days to render’. As Rüdiger said, the hair became a stylistic choice, not really a technical one.”

A key advantage of using the mixed media format with Redshift meant that rendering times were far reduced compared to if the entire film had been created in CG. “We are rendering characters, so we don't render the full CGI scenes throughout,” said Rüdiger. “You could imagine in a wider shot, the character you render is not so big. We all had good graphics cards in our workstations, as well as a medium-sized farm, and that brought us through it.”

Rendering was one of the aspects that Rüdiger and Darren were least concerned with. The team knew that because the animation was a long spot, there would be a lot of rendering, but they weren't that worried about how quick it would be.

“I think the nice thing with Redshift is that while we were actually shooting the sets, the animation was happening back in the studio,” Darren said. “Pretty much from when we got back from set, we were able to start preview renders and start getting setups and looks which really helps because it gained a lot of client confidence as they can see something quicker.

“Those iterations are becoming smaller, so you can get something close to the final product in front of your clients sooner now,” he added. 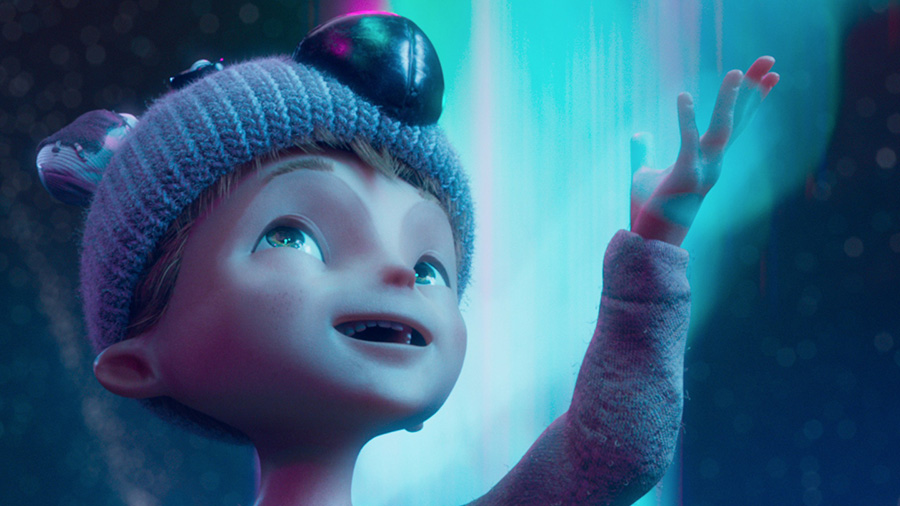 Rüdiger highlighted an unsung feature of Redshift which helped him enormously in integrating the live-action characters: “I thought how the light dome itself is implemented by Redshift and the options it gives you are really super nice. I mean the way that you can see your environment, the way that you can swap the background out because you might want to render with your environment or with the footage as a background. You have one tool that allows you to set up the whole HDRI lighting for the scene.”

Rüdiger believes that you can tell that Redshift has been developed by people who work in the industry, as the tools have been developed accordingly to deal with real-life problems. “Redshift has all the things you want to have,” he said. “With Redshift you don't really limit yourself. It's not like you constantly flick every switch in Redshift on, but if the scene requires it, you just turn it on and you don't really worry about it.” 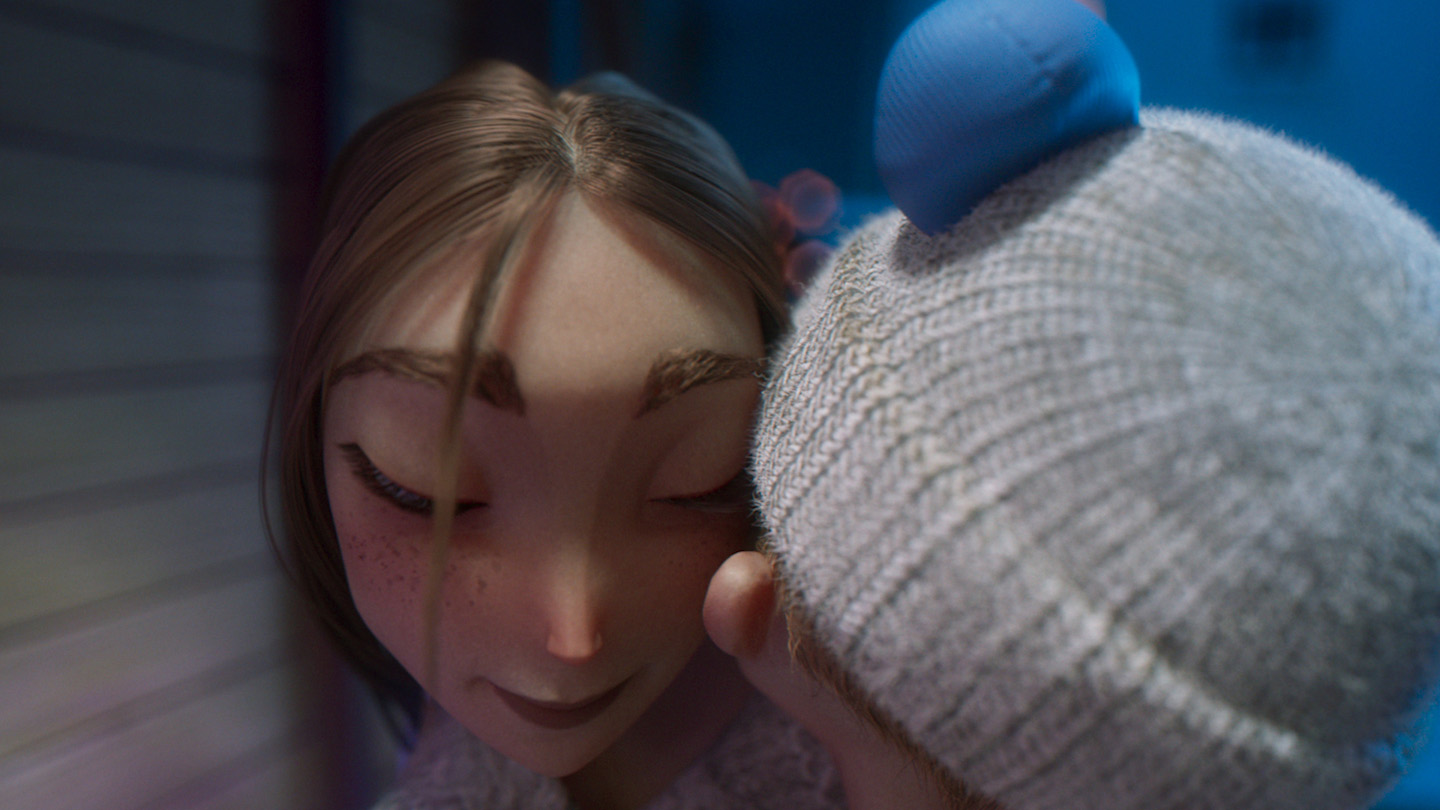 The mixed media approach paid off for the team at Glassworks Amsterdam with an amazing spot, and what’s more, the creative choice meant that it created unique moments for the people working on the project. “It was a really nice atmosphere on the shoot with our clients,” recalled Rüdiger. “One evening, for the Christmas scene, we had everyone from the agency sitting on the set, with hot-glue guns in their hands helping put white foam on to the houses. Everyone got hands-on, it was just such a nice atmosphere and so sweet.”