How two artists teamed up to make the 3D-animated horror comedy, A Night in Camp Heebie Jeebie.

A Night in Camp Heebie Jeebie is a short horror comedy about a group of scouts who find that the monsters in their late-night stories are more real than they bargained for. Created by Animator Dylan Chase and CG Generalist Dave Jacobson, the film became a passion project for the duo who met while working together at Soapbox Films. 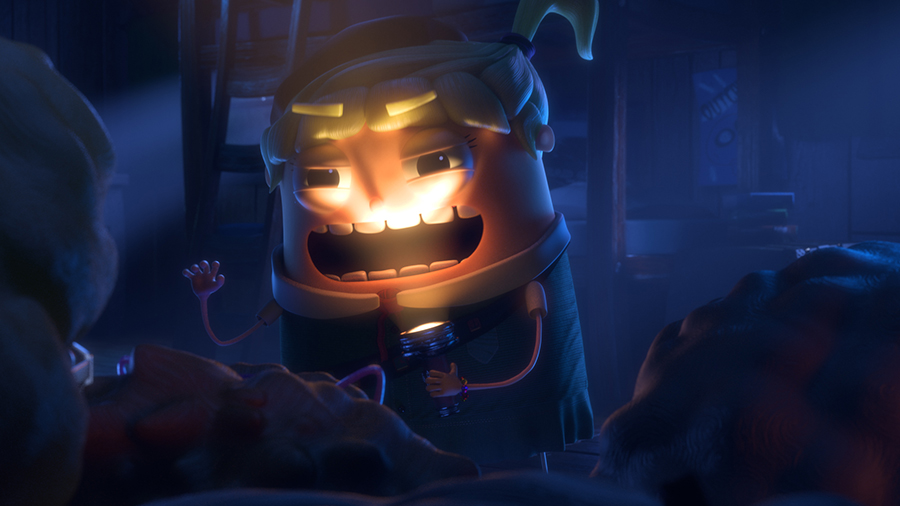 Jacobson, who currently works at Disney Television Animation as a technical director on Monsters at Work, a spinoff show based on the Pixar movies Monsters and Monsters University, and Chase, who is currently working at Soapbox Films as a story artist on an exciting new Disney project, share a love of animation. So over lunch one day they decided to tackle a personal project together.

Using a broad toolset that included Cinema 4D, Maya, Substance Painter, Nuke and Redshift, they spent three and a half years and approximately 8,000 hours working nights and weekends on the film, which premiered at Nightstream Film Festival in 2020. In addition to finding out what they were capable of creating, Jacobson and Chase also wanted to see how far they could push the visuals with a very small team, no budget and few resources.

Here’s what the two of them had to say recently about the making of A Night in Camp Heebie Jeebie.

How did you come up with the idea for your film?
Chase: The idea came from my very young sister who had just started Girl Scouts. Her pride in joining and her confidence that she could take on anything, even her worst fears, had a deep impact on me. That got me thinking about how Girl Scouts would and could take on the scariest things that life has to offer. 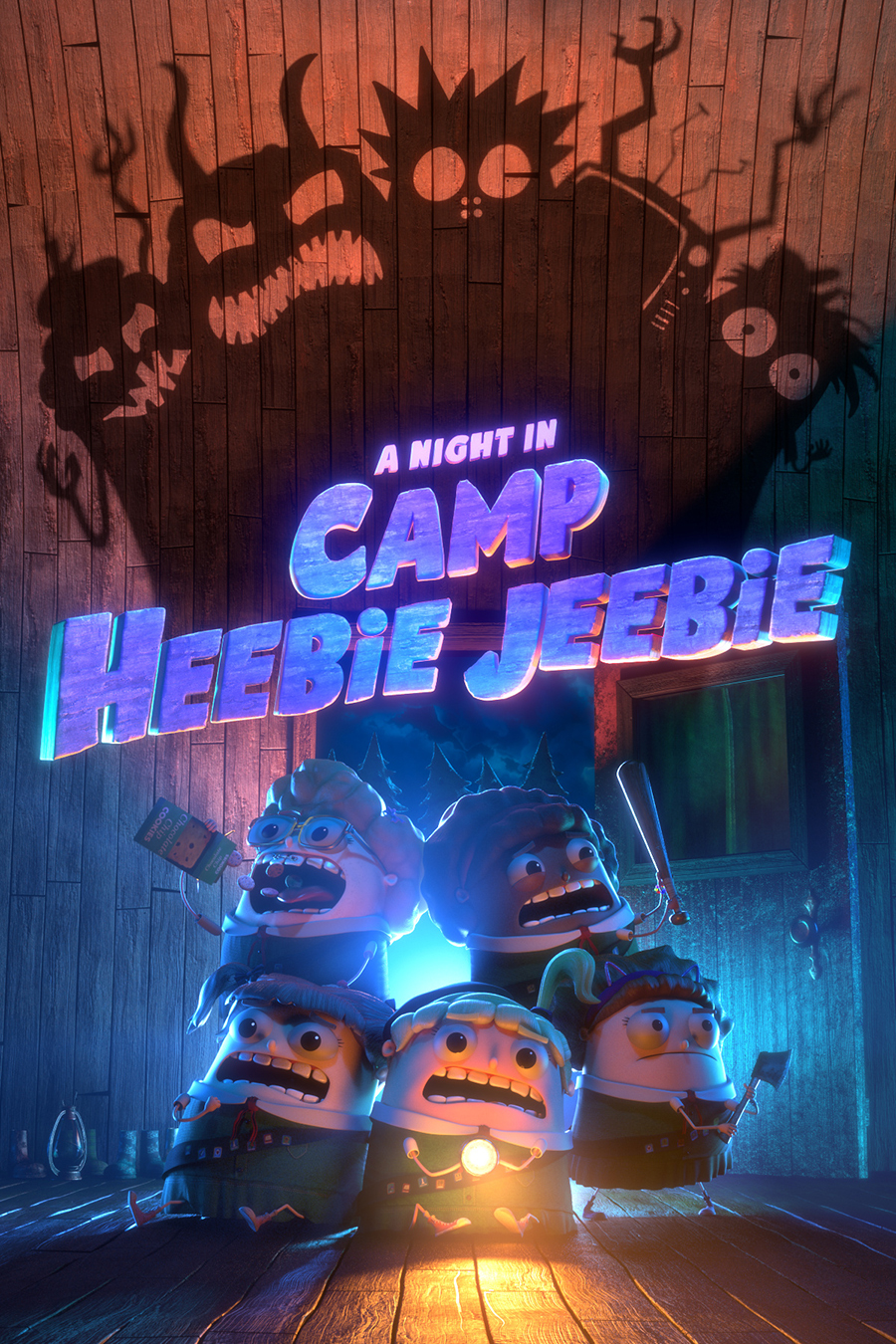 Did you two do most of the work yourselves?
Chase: It was mostly just the two of us supported by some exceptionally talented friends when we needed help. I did the writing and directing, previz, animatics, and storyboarding, animation and editing. Dave was responsible for the 3D look development, title design, texturing, lighting, VFX, compositing, pipeline development. He also handled a lot of the modeling.

Describe your workflow?
Jacobson: Everything started with boards and concept art, and we prioritized building our character assets so the animation process could get moving. We also blocked out the environment so we would know the general placement of things as we slowly chipped away at filling it in. I developed a number of tools along the way to help eliminate as many tedious aspects of the project as possible. I also wrote my own lighting tool in Maya to help streamline the process. 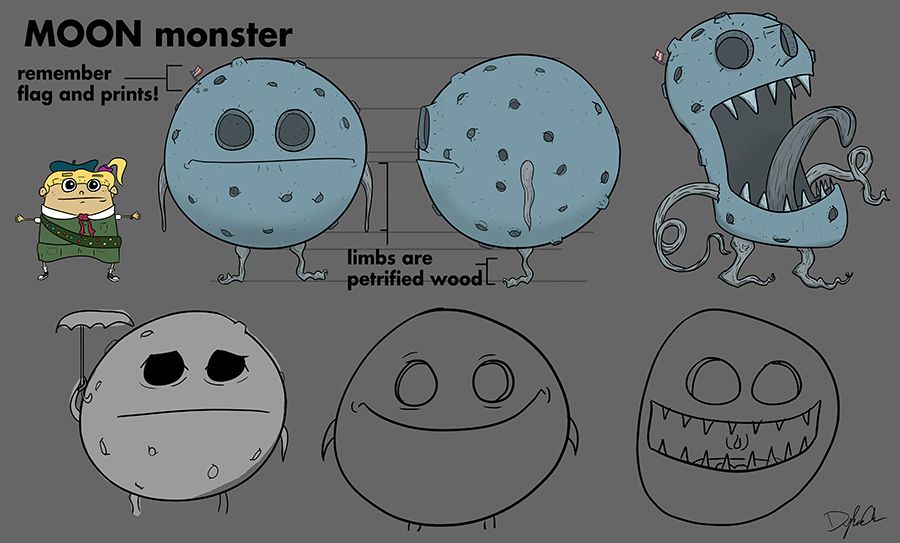 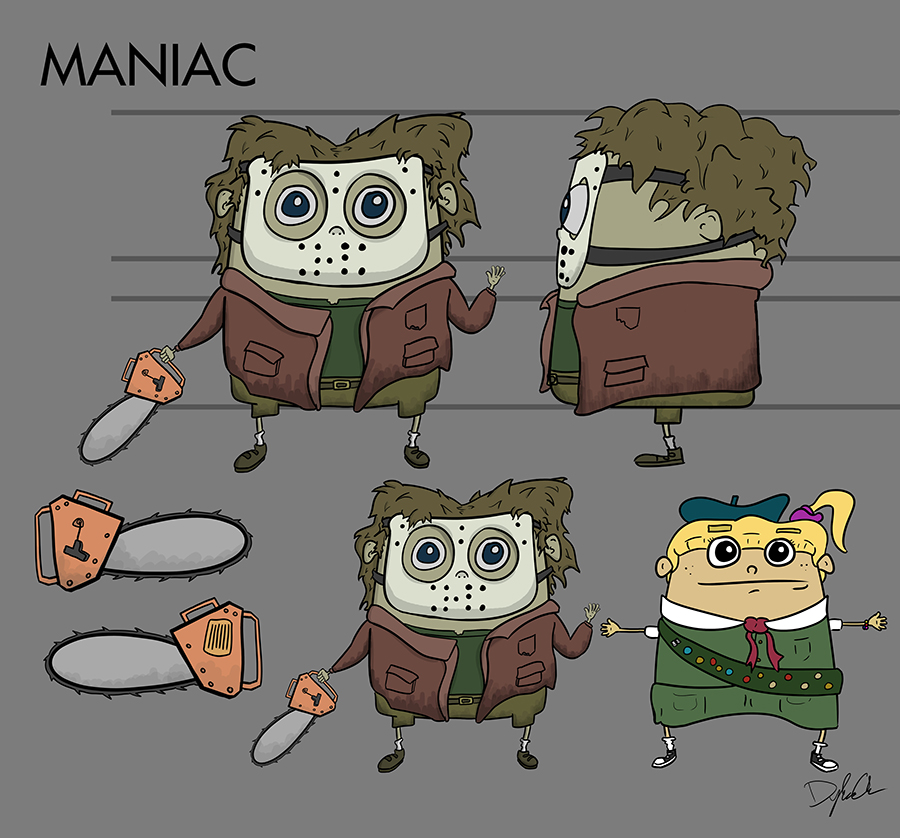 What was your setup and primary software?
Jacobson: Our setup was pretty modest. I gave Dylan my old Mac Pro to create boards, concept art and animation. And I built a new workstation for myself running dual 10-core Xeons with dual GTX1080s to handle the more intensive tasks, such as lighting, rendering and compositing. Occasionally we were able to use a friend’s computer to assist with rendering. Because all the work was created and managed from home, we used Dropbox to host the project and keep everything in sync and Deadline to manage and schedule renders.

Maya was our primary 3D tool for this project. It was used for most modelling tasks, layout, animation, lighting, and rendering via Redshift. Cinema 4D was used for title design, visual effects (lightning, smoke, clouds, fracturing) and some procedural modeling tasks.

Compositing was done in Nuke. Substance Painter made it possible to get through the tremendous amount of texturing work that needed to be done. We used DaVinci Resolve for the final conform, color grade, and output. I especially appreciated the fact that it could handle playing back EXR files in real time. 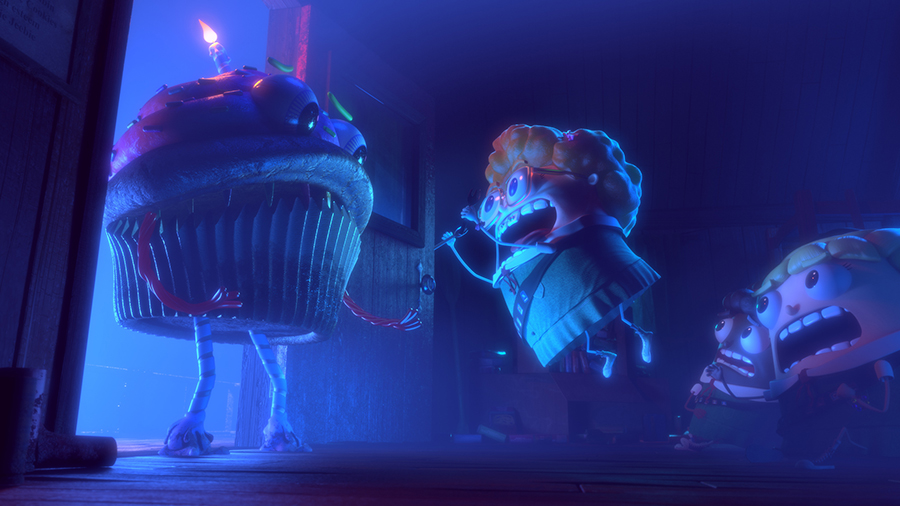 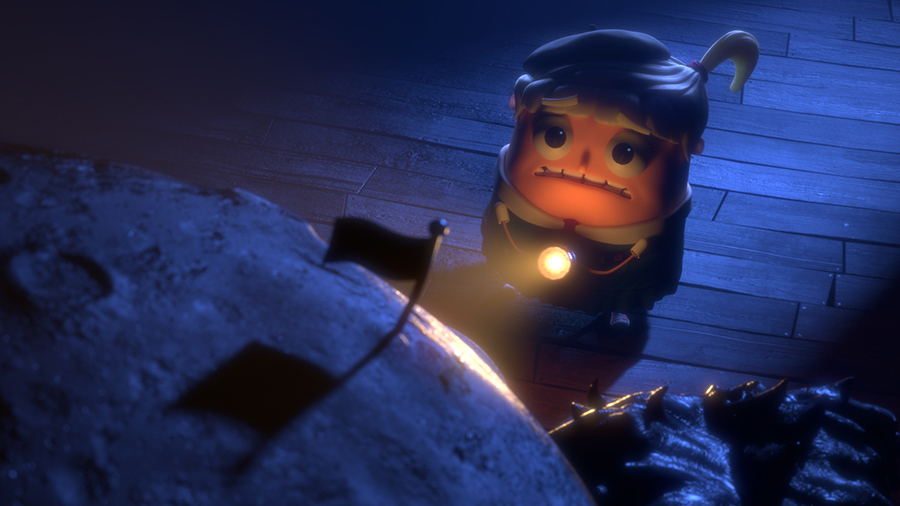 Redshift saved us a tremendous amount of time when it came to look development, lighting, and final rendering. We actually started this project with a different renderer but a year in we were having a tough time rendering clean volumetrics in less than 10 hours. I downloaded the Redshift demo to test it out and was absolutely blown away by how fast and cleanly it was able to produce the atmospheric look we were after.

In addition to volumetrics, I found Redshift’s IPR to be far more responsive than other renderers I had used. It became clear Redshift would be the path forward for our project and, within a couple of weeks, we were able to complete the transition. I managed to get our render times down to an average of 12 minutes per frame, which was a huge relief considering where we started. (Read more behind-the-scenes).

What are some of your favorite shots in the film?
Jacobson: The establishing shot of the cabin is a great place to start because it helped set the tone of our story. I wanted to layer in as many elements as possible to build a world that was rich with detail. You have the lonely cabin, fog, deep woods, sodium vapor light, moonlight through storm clouds and dark shadows.

I ended up relying heavily on Redshift's proxies to tackle that shot for a variety of reasons. I chose to build certain elements, such as the clouds, tree grooms, and wood plank geometry in Cinema 4D because I've been using it for so many years and there were certain features and plugins I wanted to utilize. Redshift’s proxies ended up being a really great way to get that data into Maya for lighting and rendering. 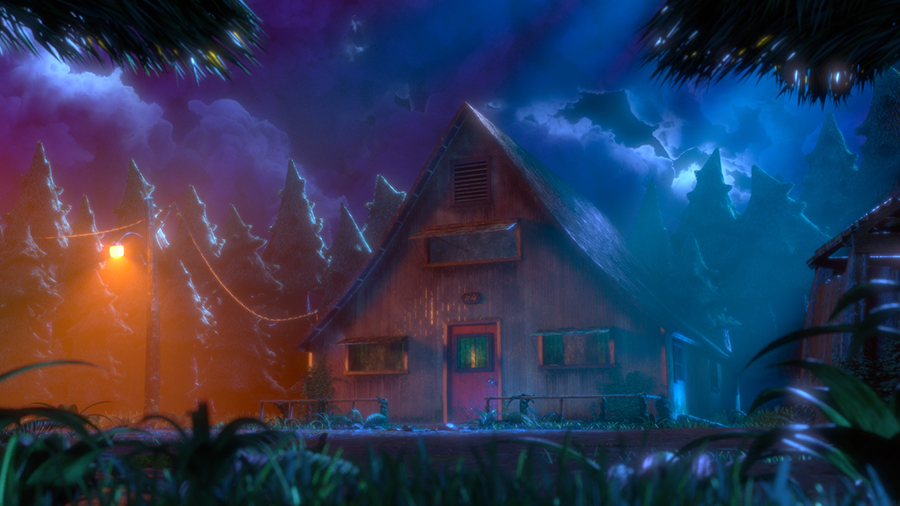 I love how the proxies can handle just about any kind of data you can throw at them, and they do a wonderful job of keeping the scene files lightweight. We created 100 frame-animated loops for the vegetation that you see on the ground. I wrote a script that would randomly offset the loop on each proxy, so they weren’t all moving the same way.

We also used a Mash cloner to randomly place our trees, which were stored inside proxies due to the tremendous amount of geometry they contained. I used to dread building scenes like this one because previous renderers I’ve used would grind to a halt when you tried to add so much geometry. Now I don't even think twice about it. 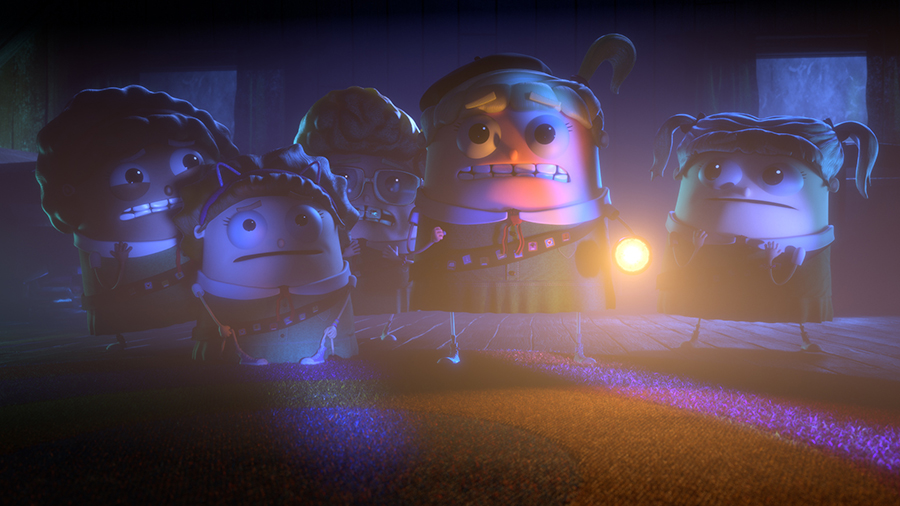 Chase: I just want to add that because we had so many characters, especially when we had all 10 in a scene, Redshift proxies played a pretty crucial role in keeping Maya responsive. Evaluating 10 rigs simultaneously is pretty resource intensive so we really appreciated the way they kept our lighting sessions manageable.

Describe another shot that stands out for you.
Jacobson: The lightning strike shot was particularly satisfying, largely because of the way Redshift allowed me to build up the look of all the individual elements. There’s so much happening in it—the trees, the rain, the lightning and then you’ve got these characters. We used a lot of material blenders and the lightning was an interesting element because, initially, I thought we would create it in 2D. But after some experimenting, I was able to produce it as a spline in Cinema 4D. 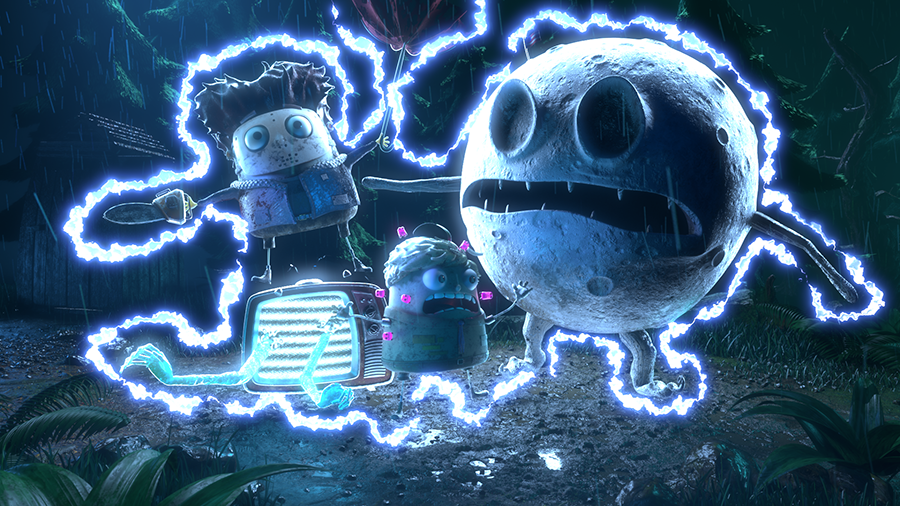 I love the way you can work procedurally in Cinema 4D and easily translate into Maya via Redshift proxies. I added displacement on top of that and even more displacement in comp, and it was really cool to be able to just have fun with it. I used Maya for the rain and was super happy with how Redshift made that a breeze too by rendering the motion-blurred particles that were falling down. Substance Painter was also a crucial tool, and I was very pleased with how well Redshift handled the high-resolution textures I threw at it.

Tell us about the characters.
Chase: I had been playing with the character design for a few years before we started development on the short. I felt like there was something really appealing about the barrel shape, especially for these little girls. I really liked the idea of our characters not being aggressively cute or attractive, like a lot of other character designs I see. This design felt a more relatable somehow.

And it was always important from a story perspective that the characters all come together in the end because the whole ideas for the film was that the monsters were just misunderstood. 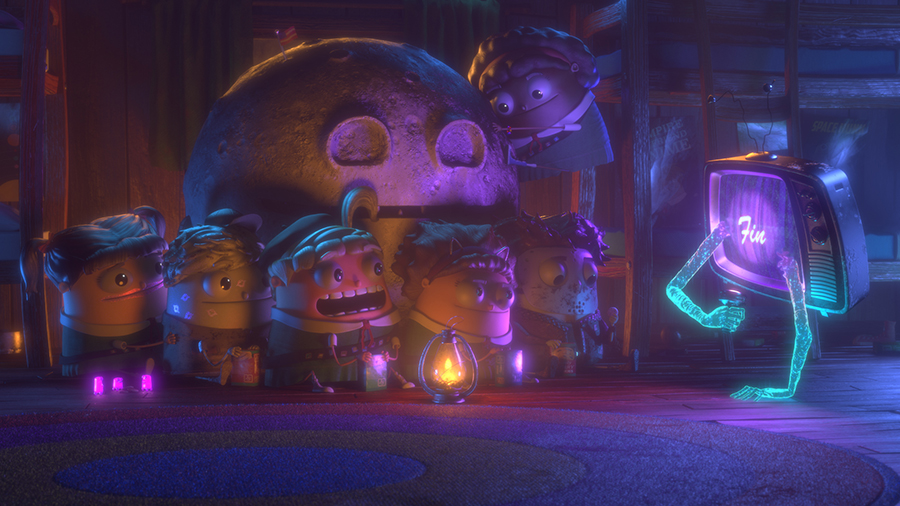 Jacobson: Yeah, the end shot completes our story and wraps up our three-and-a-half -year journey. I'm really thrilled with the color palette, which largely came from Dylan's color script. I also love the combination of all the textures and subtle reflections. It really felt like the perfect way to end things.

What did you find most satisfying about this project?
Chase: “We made the decision not to limit ourselves to time or budget, Instead, we respected the project and cared about what it wanted to be. Honoring that took time, but the result was worth it.

Jacobson: This was amazing learning opportunity for us. One of the goals I set at the beginning of the project was to see how close we could get to producing content that looked like it could have come from a major studio. Working in small studios throughout most of my career has really taught me how to work efficiently with limited budgets and resources. Redshift is such a great tool for working with different limitations, and our film is really a testament to what can be achieved.

Helena Corvin-Swahn is a writer in the UK.