Dublin-based 3D Designer Mário Domingos explains how he’s experimenting as an artist after leaving the industry to go freelance.

Visual artist Mário Domingos spent 20 years working in the creative industry before deciding to become a freelance designer. With a passion for 3D animation and motion design, he was attracted by the breadth and flexibility of independent work, and he wanted to commit more time to personal projects. 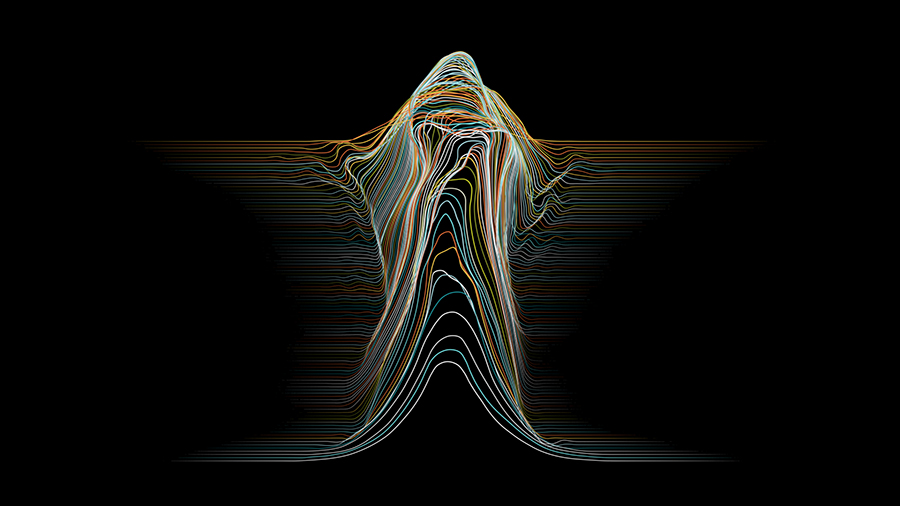 These days, Domingos applies his considerable experience in 3D design and animation to both commercial and personal work. Using Cinema 4D, Houdini, Redshift, X-Particles and other tools, he enjoys experimenting with intense shapes, colors and effects to create digital artworks that make clear his passion for artistic expression.

We caught up with Domingos, whose studio is in Dublin, Ireland, to learn more about his career change and artistic process. Here’s what he told us.

Tell us about your creative background and what you do now.
Domingos: I trained as a 3D artist in Portugal, but it was considered a niche role in the 1990s, especially in Portugal’s small 3D industry. So I became a generalist, doing character design, animation, spinning logos and VFX using Maya and Softimage.

I’ve mostly been a freelance 3D generalist. I ran my own studio back in Portugal before coming to Ireland in 2012 to work as part of a bigger team at Piranha Bar. I stayed there until October of 2020. I’ve always loved the design stage of a project where I can explore routes and shape the design. Fortunately, that’s what I mostly do now.

What appeals to you about freelancing?
Domingos: Working at a studio has many advantages, including learning a lot and being part of a family, which I really value. But I’ve always had a restless spirit and a need to do more of my own personal creative and artistic experimentation. Freelancing allows time for that, and I also get to work with studios around the world.

Why are personal projects so important to you?
Domingos: I believe that personal work is a big and important part of an artist’s portfolio. Without the constraints of commercial briefs, it shows who you are, develops your style, shows what you’re able to do, and gives you exposure. I personally regard it as an opportunity to learn through artistic expression. 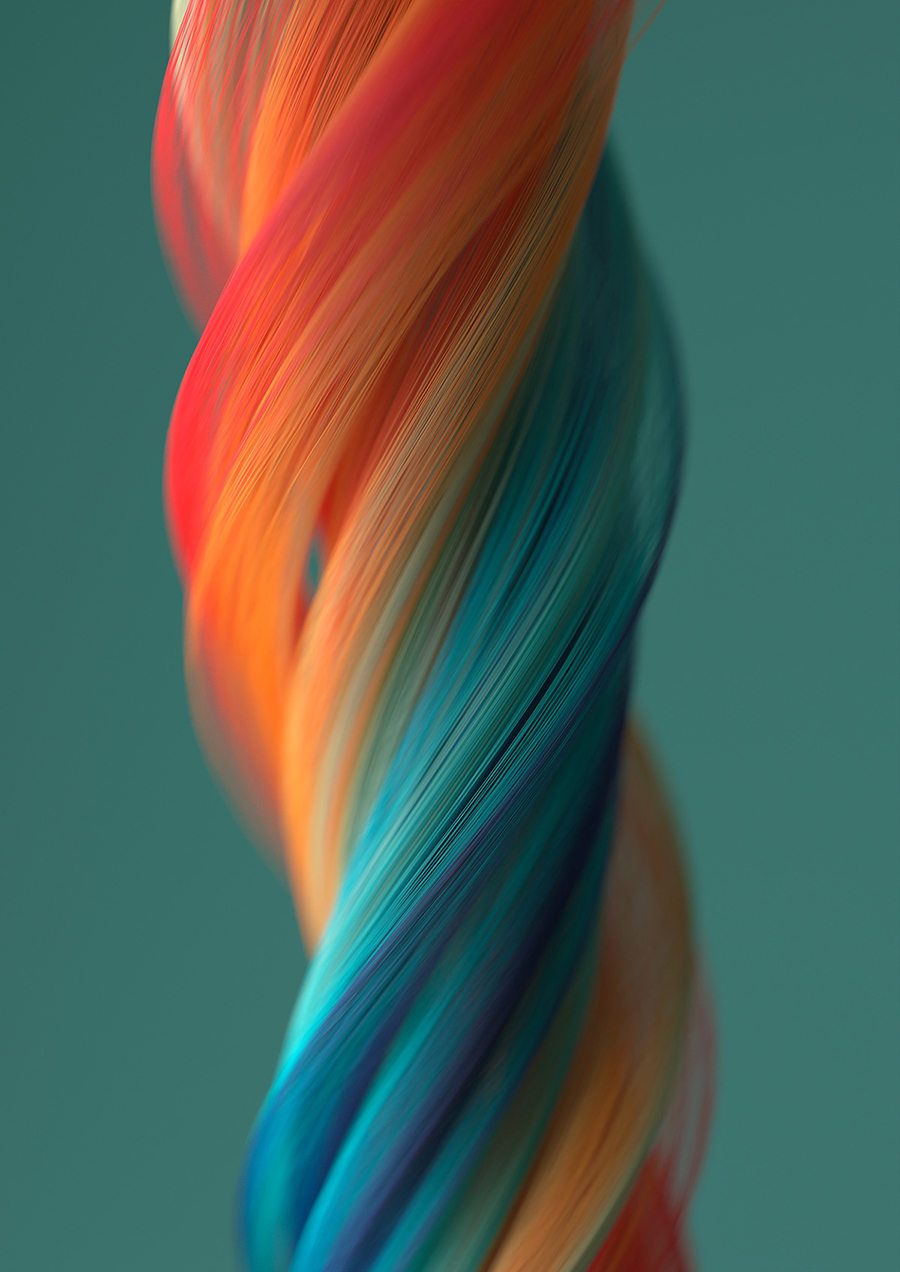 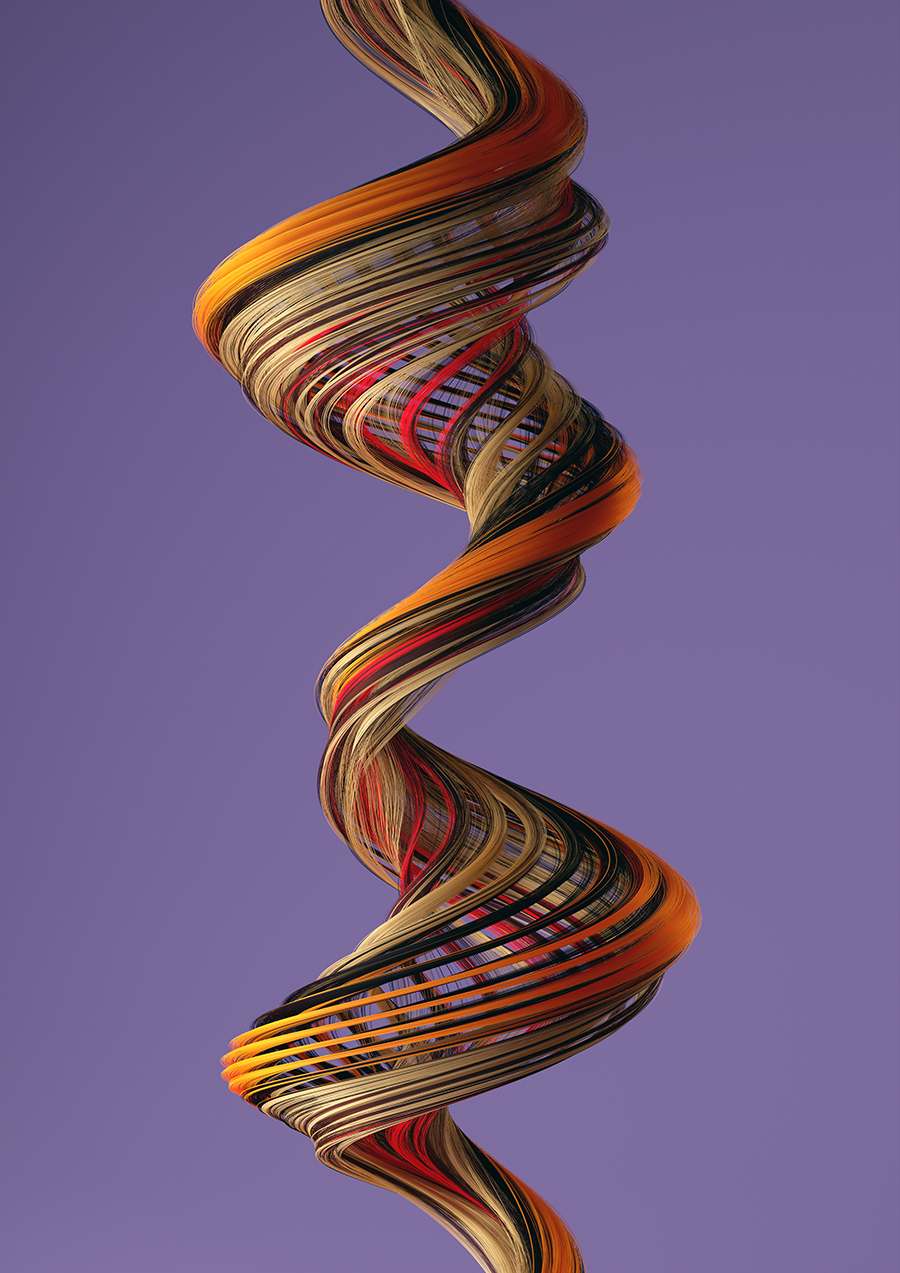 Domingos’ “Contained” series shows that order can be found even in what looks like chaos.

Was it difficult to transition into being completely freelance?
Domingos: With a family to provide for, I planned the move very carefully so I could build and sustain business. I knew I needed to showcase my capabilities, so I started producing a personal portfolio of work that felt authentic to me and used Behance, Instagram and Twitter as marketing platforms. I also found The Freelance Manifesto by School of Motion’s Joey Korenman pretty helpful.

My experience working on commercial briefs has also been very useful, especially when I meet with clients and directors. Understanding their needs is not always easy. I’m now working internationally, primarily for clients in the US, including Apple, Google and Amazon and for studios like Buck, Brand New School and Stylo.

There is of course a disconnect between commercial and personal projects. My work for a client is to a specific brief, whereas an artwork is my personal journey. Ideally, my eventual goal is to work as an artist, free from the need to accept commissions.

Does exploring tools inspire ideas or do ideas lead you to the tools you use?
Domingos: That’s a good question. I feel that most of my pieces are explorations of how I use 3D software, much like how I paint using a paintbrush. I see how the paint behaves by playing around with it. Like playing with a new toy, it’s a free creative process, all about seeing what happens if I do this or that. 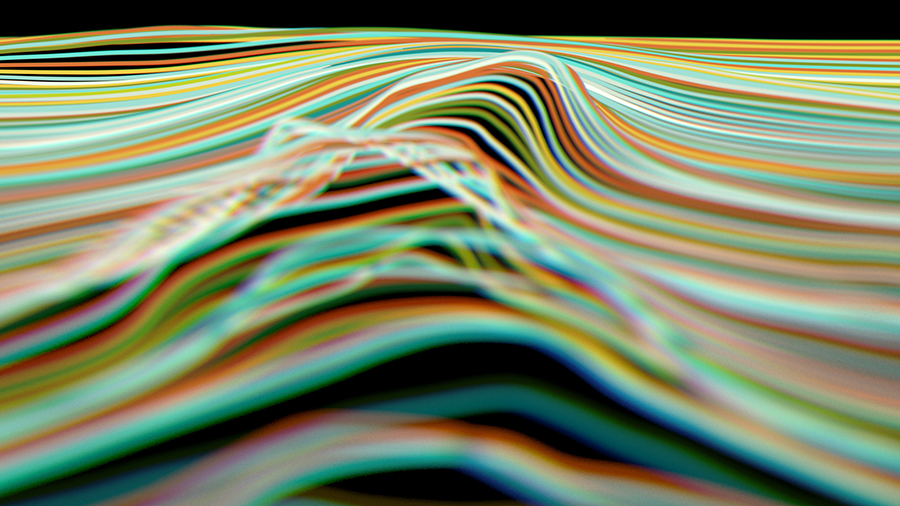 “Draad-Dreams of a Guitar” is an experimental piece designed to be accompanied by music by Luis Martins.

But I have been battling with the thought: ‘should I be a more profound artist and think of the idea first and then try to achieve it?’ That’s hard for me. Once I start dissecting an idea and storyboarding it, I get bored and lose interest. Maybe it’s too close to a brief. Maybe I overthink it. So, when I’m doing something for myself, it needs to be a more spontaneous process, creating something from nothing.

What software do you use primarily?
Domingos: Cinema 4D is now my primary motion design tool. It has really opened up the world for me. I also started working with Houdini recently and, together with Redshift, they are the perfect toolset for me. I used Redshift for the first time on a real job when I worked at Piranha Bar in Dublin. It was so fast, flexible and simple to use, it transformed our whole process.

As a freelancer, that speed and flexibility allow me to work more effectively without needing to rely on a huge render farm. Also, most studios use Redshift, so that makes it easier for me and for them. I have a series of digital canvases called “Contained”, and they’re a great example of how well Redshift handles the native Cinema 4D tools.

I created a surface that emits hair, added a twist deformer and a bit of hair clumping to get more detail. I didn’t need to go around and create a Redshift hair shader, it did that for me and translated the native Cinema 4D hair shader perfectly.

Tell us about some of your other personal work.
Domingos: “Draad – Dreams of a Guitar” is an experimental piece I made using Cinema 4D, Redshift and X-Particles. The visual image was always intended to go with music, which was made by my good friend Luis Martins, a brilliant musician and guitar player. I used X-Particles for the dynamic splines as I advected them through a smoke simulation. I used Redshift’s user date nodes to generate the random colors for each line.

Redshift’s bokeh on the camera tag enabled me to simulate chromatic aberration. By just loading a map into the bokeh image slot, you can achieve pretty neat effects. And depth of field is an amazing and fast feature in Redshift too.

Redshift was also central to achieving the “Veins” exploration series. Using the dispersion attribute on the Redshift material, I simulated the spectrum light separation you get when you shine light through a prism. That was a crucial part of achieving the look I wanted. I pretty much used the same approach for “Dyslexic Illusion,” except it was Redshift’s post effects that helped me achieve the final look. In this case I used Bloom, Streak and a bit of color correction. 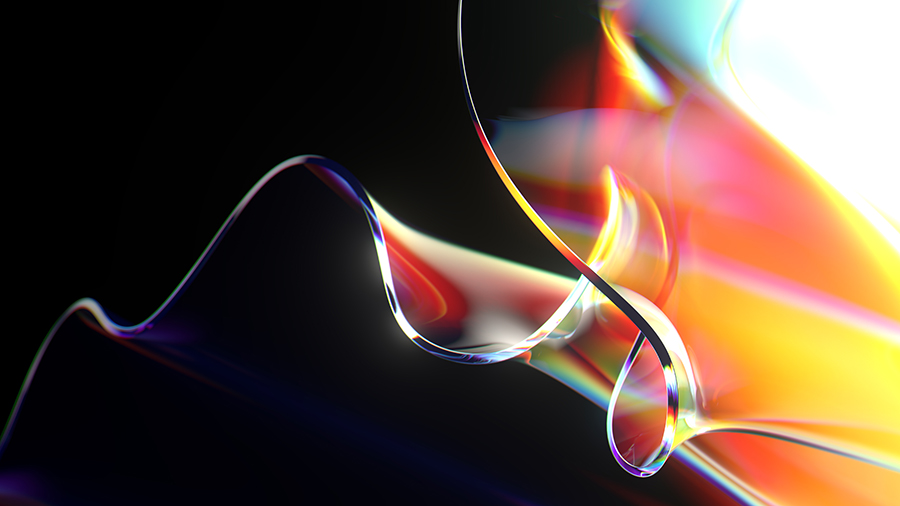 “Dyslexic Illusion” simulated light separation as it would appear when light is shown through a prism.

Another really important thing about Redshift is that you can easily include or exclude lights from illuminating objects; or even exclude objects from interacting with other objects. Basically, it allows me to break the rules. For example, I can keep a specific object from reflecting in another object so I can create really complex scenes that have a non-realistic look.

At what point do you know that play has turned into art?
Domingos: There’s a point when suddenly I have a beautiful image on the screen, and I enjoy the rush of that. But there’s also excitement in realizing that I am expressing or manifesting ideas that I’ve been thinking about. With the “Contained” series,” for example, what came to mind was that sometimes life looks chaotic but there is always an order to the chaos, and that’s the idea that the image presents.

Some lines may feel random, but they are actually ordered. For me, it represents the flow of the universe, the order in physics. If we can see the big picture what feels random or chaotic appears to flow. 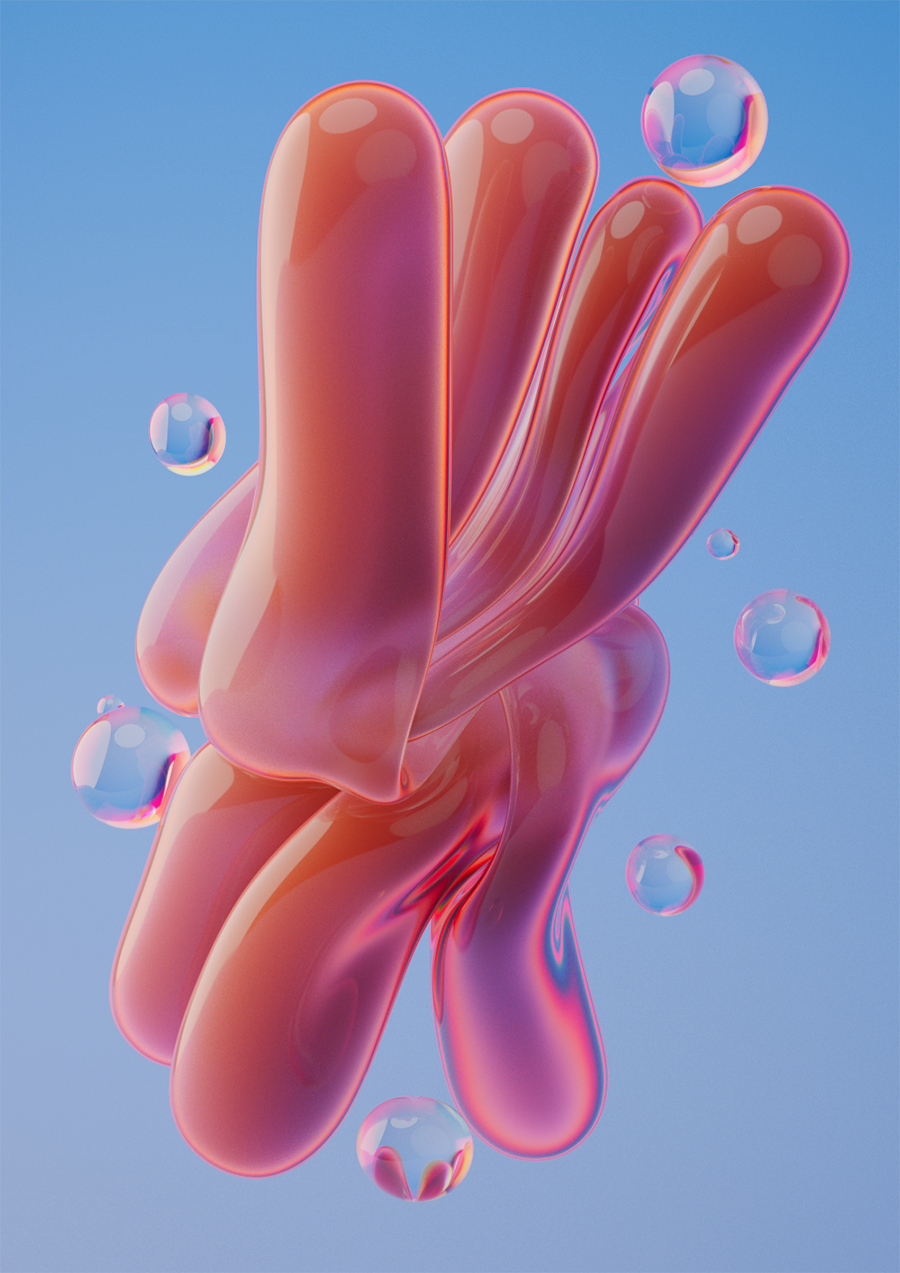 Where do you see yourself going from here?
Domingos: Professionally, I dreamed of getting to a position where I could choose to work with studios like BUCK, and I have achieved that now. I make money doing what I love, and I also have freedom to manage my life and time to spend with my family. My next goal is to build and grow my name as an artist. I want to be able to make a living from my artistic work, no brief.

I think the Blockchain/NFT technology is going to help with that. Many artists are now able to add value to their work and sell to collectors. It's definitely a paradigm change. I recently took my first steps into that world recently and sold a few pieces.

Helena Corvin-Swahn is a writer in the UK.