Exploring new Dimensions: META: The Art of Being There use Redshift at Coachella

Discover how creative technologists META: The Art of Being produced an exclusive animation of 'Flatland: A Romance in Many Dimensions' using the power of Redshift coupled with SkyScale for the Antarctic Dome powered by HP at this years Coachella Festival

It is not often that a novella, written in 1884 by an English school teacher exploring concepts of mathematics and theology, combines with one of the world’s leading creative festivals to debut a unique and compelling audio-visual experience.

Yet that is exactly what happened at this year’s Coachella Music and Arts Festival where a world-renowned, multi-disciplinary creative and technical team brought Edwin Abbott Abbott’s Flatland: A Romance in Many Dimensions to life in The Antarctic Dome powered by HP.

Spearheading the team was director Justin Bolognino of multi-sensory experiential specialists META: The Art of Being There, who strive with every project to combine intelligence, storytelling and artistry with the latest in live immersive technologies.

Using his years of knowledge in shaping unique experiences for audiences across the globe, Justin adapted the Flatland novella into a new visual format. This new format was designed to make full use of the spherical perspective of the dome to expand the ‘protagonist’, which is a square in the book, into literally a new dimension by depicting the protagonist as a cube.

The cube could then ‘tell’ the abstract story of discovery and expansion which is broken into three distinct scenes, as Justin explains: “Each of the three scenes has a portal between them, in this portal there's a transformation…” During ‘Timeland: The Realm beyond Space’ the square protagonist, as there was in the book, forms into a cube. “At the birth of the cube, it emerges from the grid of Flatland,” Justin continues, “The cube then transforms after it goes through the portal into ‘Mindland: The Geometry that connects all of Nature’ into the ‘Pyritohedron’ character that then explores Mindland which is the universal grid that connects all of nature.”

“If Timeland is very much about the surface, Mindland is about the realm we can't see behind the surface and the Pyritohedron explores that realm.” For the final dimension ‘Voidland: The Infinite Void of Surreal Abyss’, the Pyritohedron transforms into an anima which means ‘soul’ in Latin. Where the Pyritohedron could interact with and take on elements of its surroundings and environments. The anima can do whatever it wants; it can become its environment it can take on any shape and any form that it wants at any given time. The anima is the most evolved character and what we have is a story of transformation of consciousness as seen through these three different characters that explore these three different realms.” 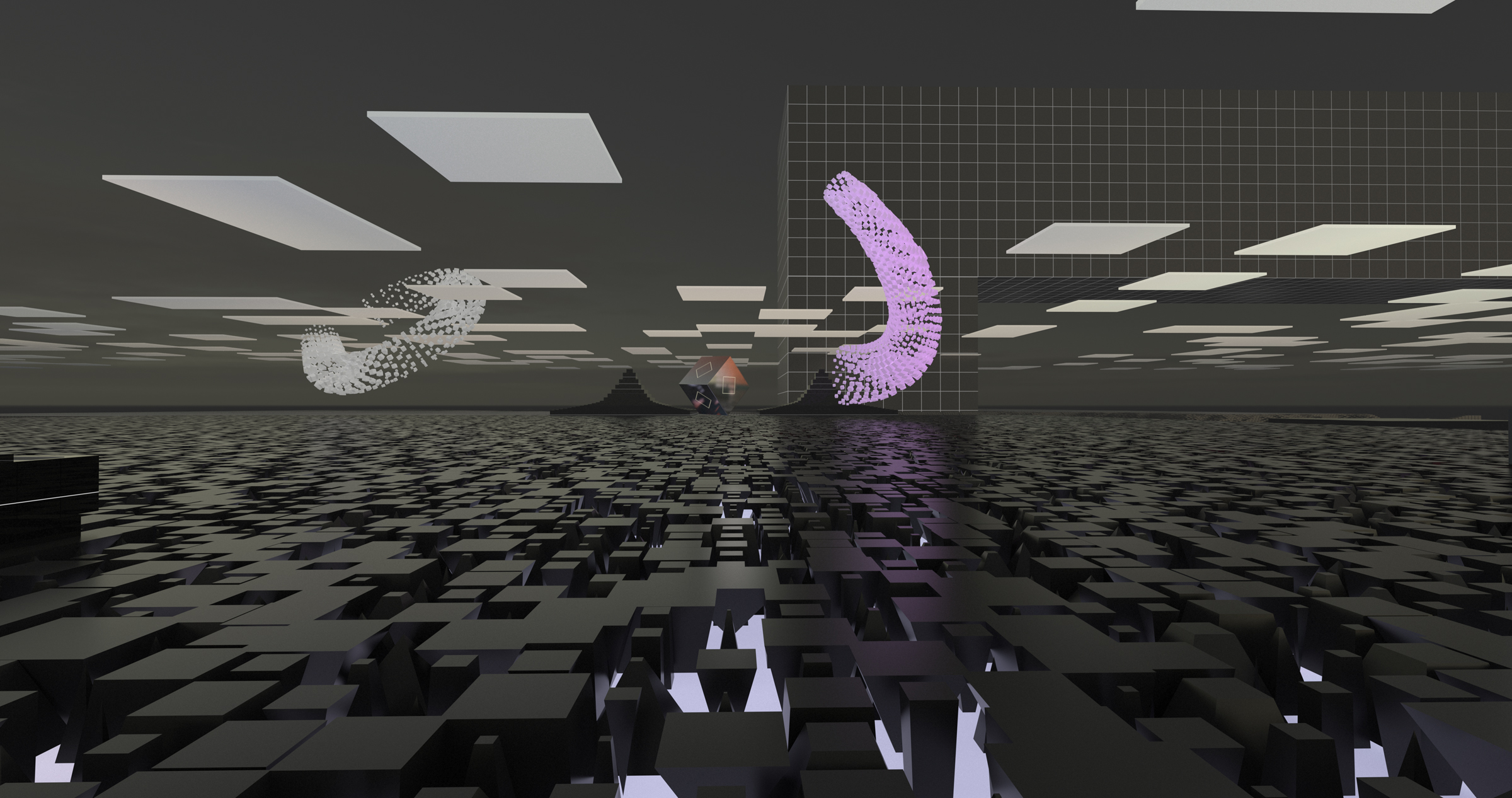 Justin chose another visionary talent to create the soundscape that would be instrumental to tell this remarkable journey of transformation, and would be the key to linking the three acts together. “Annie Clark, aka St. Vincent composed the score for us,” says Justin. “The strategy from the beginning was that her score would give the greatest sense of cohesion to the whole film. Everything started with her work, and then we built the film based on her score. She did such an amazing job, it was a humbling to work with her.”

Beyond the realm with Redshift

Each of the three conceptually distinct acts in Flatland had their own artistic director. For the first act, Timeland: The Realm Beyond Space, Justin chose long-time collaborator Devan Harlan as art director. Devan would bring his famed visual and motion design skill set, which has been used for some of the world’s leading brands, musicians and film festivals, to create the landscape which was at the heart of the first act of Flatland.

As Devan states,” I think there's a lot of trust between Justin and I because we have worked together for so long and on so many projects. He knows my aesthetic, he knows my capabilities. So when he put together a loose set of storyboards for what this section should look like, it is implied that there is still a lot of creative freedom for how that would be executed.”

Due to the sheer scale of the HP-powered Antarctic theatre Flatland was to be projected in, Devan needed to produce 5K square spherical renders. After spending time researching GPU render options to replace his existing CPU-based workflow, Devan settled on a combination of Cinema 4D and Redshift to deliver Timeland.

Devan chose Redshift not just because of its famed speed, but because it felt familiar to his previous biased-based CPU render solution. “I was really happy with the performance of Redshift. I was also really comfortable with the way the interface was set up. I liked the fact that it has a lot of options, whereas in some of the other GPU packages it's kind of limited. I want to be able to get underneath the hood and really push things to my liking.”

As Flatland was powered by HP workstations, Devan and his team were able to work and utilise the iterative strength of Redshift to develop Timeland in the studio and really concentrate on crafting the look of the landscape. Devan found that the task of iterating was much easier than in his previous CPU-based render solution, as he explains: “When you're in the lookdev phase and you are just trying to be spontaneous and work things out in a stream of consciousness fashion. Just being able to see things happen right away and not have to start digging into the guts of a piece of software makes the creative process go more smoothly.”

“At that point in the lookdev I'm not even really digging into what all the options and features available within Redshift are, I'm actually just skimming over at a surface level. I think the way that the software is organised and the way it integrates very seamlessly into Cinema 4D, made it very easy for me to get in and start working with Redshift right away even though I've never used it on a single project before.” 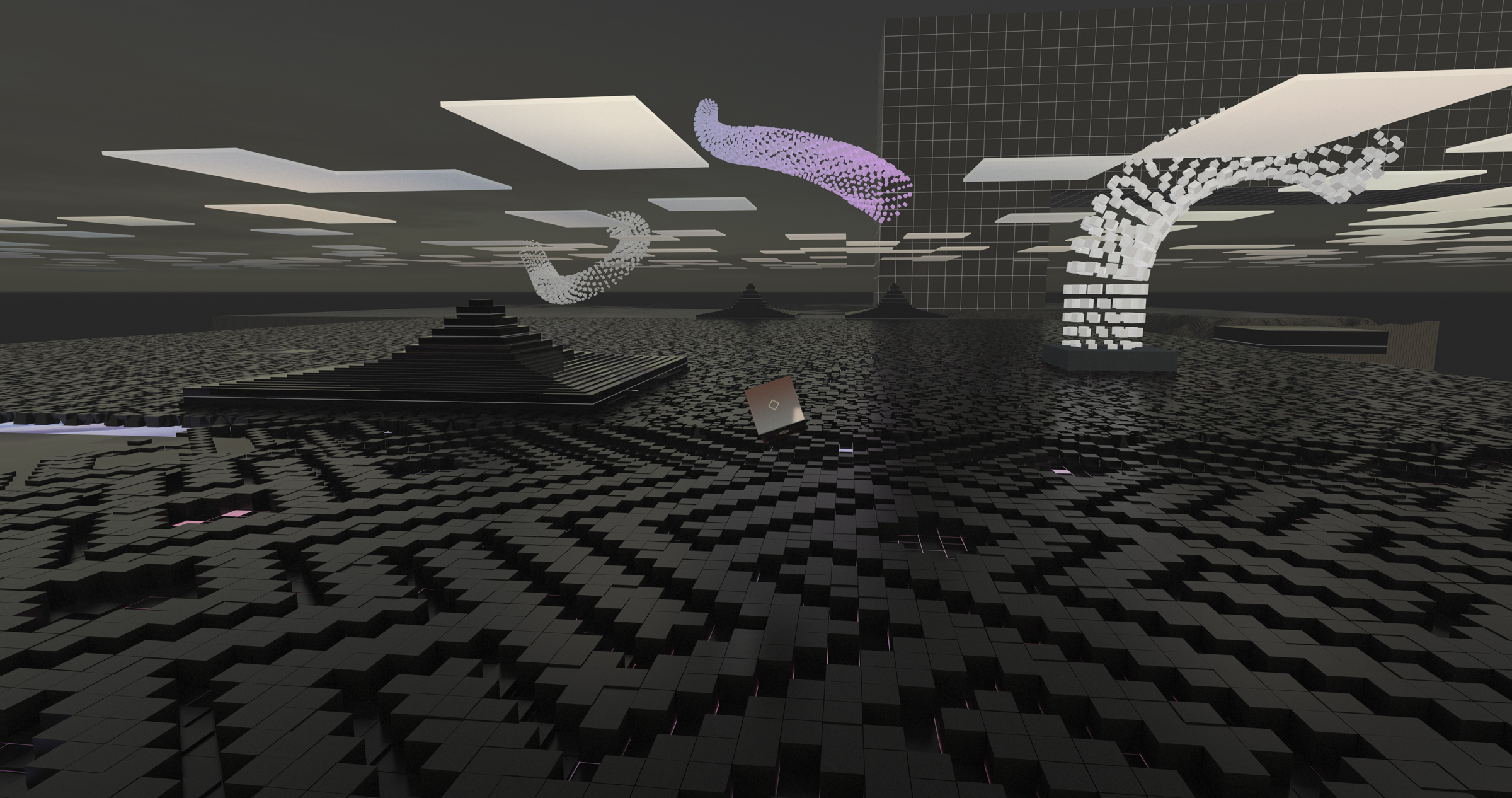 The entire Flatland project had a production duration of only two and a half months. Devan calculated that he and his team would need a week and a half for the final render for Timeland, which meant that each 5K frame had to take no longer than 5 minutes a frame.

Even with the in-house computing power, thanks to the partnership with HP for the project, Devan knew that for the final render he would need a dedicated external render provider. Which is when he happened to receive a call from another long-time collaborator Joshua de Salis Sophrin from JDSS who was also the technical lead from accelerated cloud service provider SkyScale.

Joshua and Devan had worked together previously on similar large-scale video projection work. Joshua recalls, “I actually reached out to Devan for a different project and had uncovered that he had this deadline that he needed to meet.” This project was Timeland, and as Devan explained what was required, Joshua realised he could help, “Working with SkyScale, we were able to present an option for Devan on Timeland that accelerated the render time.”

SkyScale provides bespoke cloud compute solutions for highly demanding specialist applications such as those found in Life Sciences, the Military and A.I.

SkyScale can also leverage its knowledge and hardware acumen to provide dedicated cutting-edge ‘bare metal’ solutions for the Media and Entertainment industries. This was what Joshua created for Timeland, giving Devan access to a single node system which contained the latest NVIDIA Volta (V100) GPUs.

To utilise the brand-new NVIDIA Volta architecture, the Timeland team had to use a Beta version of Redshift. Thankfully Flatland had the full support of the Redshift developers who brought their renowned customer support and technical knowledge to the project to make sure that Devan was utilising the most from the SkyScale system.

Panos Zompolas C.T.O at Redshift explains, “Redshift 2.6 (soon to exit the beta stage) supports NVIDIA’s newest Volta GPUs like the TitanV and V100. In our tests, these GPUs can render considerably faster than previous-generation GPUs like the TitanX, GTX1080Ti or GP100. Redshift can address up to 8 GPUs per render session. Using a render manager like Thinkbox’s Deadline, it’s possible to launch concurrent render jobs (each using up to 8 GPUs) and address more than 8 GPUs per computer.

With the help of the Redshift development team, Devan made the most of the power of the SkyScale system. Devan’s render times dropped from 25 minutes a frame with the studio setup down to five minutes using SkyScale on the most complex parts of the Timeland animation. This exponential acceleration of the renders, as well as the network infrastructure of SkyScale, which allowed low latency remote connections, meant that Devan felt as though the SkyScale system was in his studio as he accessed it through Microsoft Remote Desktop.

The combination of SkyScale’s cutting-edge GPU power and infrastructure coupled with the ease of use and speed of Redshift in the studio when used with the HP workstations meant Devan could work the way he wanted to for the final render process. “It definitely met our expectations in terms of what the future of GPU rendering should be like,” he says. “When I compare the sort of trouble and frustration that I've gone through on jobs in years past with various CPU renderers, it was such a breeze to be working with these new tools”.

The future of storytelling 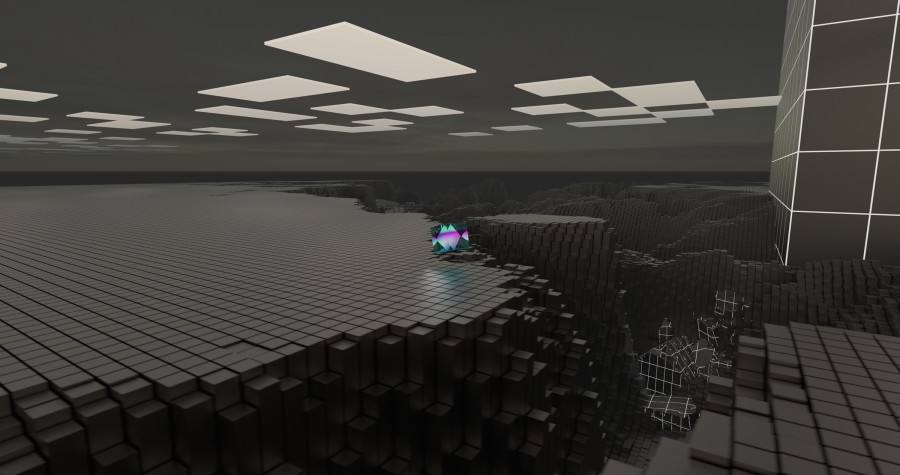 The final word on an extraordinary project from an extraordinary team belongs to its director Justin Bolognino: ”Everyone on board was coming from a place of integral consciousness. That was kind of the story we were telling, if you can hold simultaneous truths, you can explore reality. Hopefully that shows up, not only in the film, but in the process of making the film. That comes down to using artists and collaborators who are essentially that evolved as producers and thinkers.”

Adapted and directed by Justin Bolognino