Overwatch from Blizzard Entertainment has become a firm favourite of gamers worldwide thanks to its vibrant characters and its focus on collaboration amongst players. This ethos is similar to that of the LEGO brand, and so it was only natural that these two great brands wanted to collaborate on a new series of Overwatch LEGO Minifigures and play sets.

To celebrate this announcement, Animatrix, a creative studio based in Vilnius, Lithuania, was commissioned to create a live-action and CGI short. This visual extravaganza mixes Overwatch Players and LEGO Overwatch Minifigures in a Redshift rendered romp.

We spoke to the team at Animatrix about how this project came to fruition, and the opportunities and challenges that working with two globally renowned brands brings. 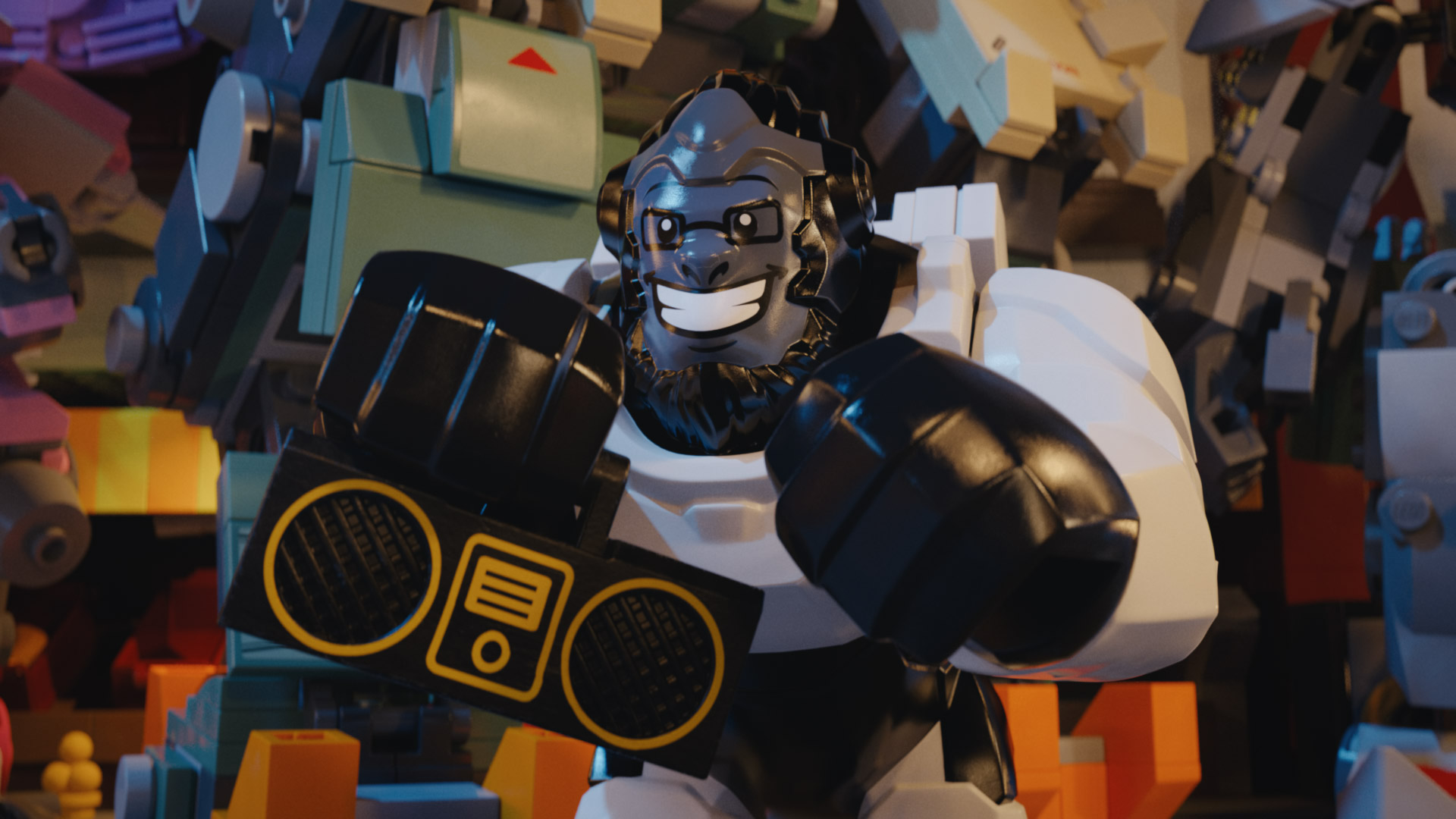 Proving our strengths
Animatrix was formed in 2011 and exploded in size in 2016, thanks to a Danish Railway company project, and now has a staff of around twenty people. We spoke with Dovydas Vilkelis, co-owner and managing producer; Tomas Juchnevic, co-owner and animation director; Jonas Konstantinavicius, lighting artist; and Peter Betenev, lighting artist, about the LEGO Overwatch project.

"We had been looking to work with the LEGO Group for quite some time,” Dovydas explains. “We were working closely with a Danish production company, who are also our agents in Denmark. As we are big fans of the LEGO Movies and as the LEGO Group is from Denmark, it seemed natural to try to reach out to them. At first the work was small, for example, compositing CG LEGO arrows onto a live-action plate, or creating matte paintings for a LEGO Batman commercial. Based on this work, we got the opportunity last autumn to pitch for the LEGO Overwatch project."

"It is an honour that they chose us to help them on their journey,” says Tomas. “During the pitch, we had proposed to make a CG animation with a stop-motion feel. We did establish rules, such as how characters should move with animation tests. The LEGO Group liked what we did, and we started working together.”

After winning the pitch, the first thing the team did was to buy the Overwatch game and start to play, to get to know each character better; who they are and how they move. “We spent many hours with a director and creative director from the LEGO Group brainstorming,” Tomas explains. “Thinking of all the gags and funny bits that would improve the story. Things that would work in the LEGO world, and would be recognisable by Overwatch fans."

The concept of mixing Overwatch players with their LEGO Overwatch minifigure characters
was also something Animatrix helped with, as Dovydas recounts: "We contributed to the script development, but the idea to use live-action shots mixed with CG LEGO elements came from the LEGO Group and Blizzard Entertainment. They provided a treatment which was later developed into a production script by the director and the Animatrix in-house animation director."

Global responsibility to players
As they were working with two global companies, the Animatrix team were acutely aware of the responsibility of meeting the well-established high brand standards for both the LEGO Group and Blizzard. "The biggest restriction from Blizzard was not to break the Overwatch game world rules,” Tomas remembers.

Tomas also observes that the restrictions helped the team to think out of the box and be more creative: “The animation had to feel like stop motion. We knew from the beginning that we would want to animate it the way we would do in stop motion. LEGO elements don't bend, so we tried to animate those parts which actually can move in real life. Restrictions in LEGO minifigure anatomy made it a fascinating creative process and fun to animate."

Anatomical restrictions aside, the LEGO Group also provided some brand guidelines to the team: one of them was to avoid pointing firearms directly to the camera or at other minifigures. “It was a creative challenge to make a video for a shooting game without the characters shooting at each other!” says Tomas.

“The scene with Reaper, for example, he took out bananas instead of weapons, and when he took out the bananas, he was pointing them upwards. In another battle scene, Reinhardt pops D'va's bubble with a finger,” he continues. “We wanted to make a LEGO friendly environment, with LEGO humour and an Overwatch feel."


Adding new tools
Working with the LEGO Group meant that Animatrix had to add some new tools to their pipeline. "Our pipeline centres around Maya and we use it for everything, from environments building to rendering,” Dovydas reveals.

When it came to environments, the team used the same proprietary software used on the LEGO Movies themselves – LEGO Digital Designer – to rebuild the Overwatch Dorado map brick by brick. “This meant we could keep the LEGO world authenticity and rebuild everything in the real world from LEGO bricks,” says Dovydas. In addition to the LEGO software, Houdini was used for FX and Nuke for compositing.

Redshift experts
Animatrix chose to take a GPU route early on and is no stranger to Redshift, as Dovydas explains: "When we started, we did not have anything, only a few PC machines. We had to be effective and clever about how we spent our money. The decision to use GPU rendering was decided, as with a small amount of money we could have a decent render farm with which we could work.”

“It was one of the best decisions we made at the beginning of our studio existence,” he says. “We tried other engines as well, but Redshift looked most production ready. So we were using it almost from day one."

This was going to be a big project for Animatrix, and despite the LEGO Group supplying minifigure and robot 3D assets, the amount of work the team had to undertake was immense. "We had almost ninety fully CGI or mixed shots, twenty characters, a lot of different elements in the environment and only three months to make it all,” Jonas describes.

“It would have been impossible to make shaders for each asset separately. Luckily, LEGO bricks are one material – plastic – and only the colours were different.

"Our lighting artists developed one main shader for all of the LEGO assets. They changed colours using a Redshift shader switch and integer user data nodes by entering different attributes,” he continues.

The geometry parts were detached by colours and all of these parts had their own attributes. "The other challenge was that geometry exported from LEGO Digital Designer had sharp edges and was low poly so we couldn't use subdivision, that's why we used Redshift round corners," says Jonas. "If we did not have these features within Redshift, this project would not have been possible."

Building Overwatch in LEGO
As well as the CG assets, there was also the added complication of a VFX shoot. "As minifigures are very small, even the slightest change in the lighting setup made a big impact and we had to create HDRIs almost for every shot,” says Dovydas.

“In the end, we had around thirty HDRIs,” Dovydas continues. “You can imagine what it means on a live-action shoot when we had three-night shifts with a lot of overtime. Time was limited to prepare previz for the shoot, so our animation director was acting with minifigures on set to count how long the live-action plate should be or how fast the camera movement should be.”

Another big challenge was rebuilding the Overwatch environment from LEGO bricks. "We did not know which bricks would fit best for specific parts of Dorado buildings," Tomas explains. "We had builders trying to rebuild the Dorado map from LEGO elements, and each had some great design solutions, so we ended up mixing the best-looking parts."

It was Redshift’s power and ability to work across multiple applications that really helped the project to be successful. "To paint up the explosion, we were using vertex colours, imported from Houdini, remapping them to the needed ranges and colours," says Peter.

Techniques and approaches like these have helped Animatrix to evolve from its humble beginnings to manage and complete a project such as LEGO Overwatch.

The studio’s current setup is comprehensive and capable: "We own a render farm with Nvidia RTX graphic cards so it was running day and night, and lighting artist workstations were rendering during nights and weekends so in total we had 16 GPUs running," says Dovydas. With an RTX-enabled farm, Animatrix is set to make the most of the advancements coming in Redshift 3.0.

"Every project feels like a journey, you meet many interesting, talented people on the way, that are heading towards the same goal and we are glad that Redshift is a part of it." says Tomas.