A Message from Space

Five years in the making, Researcher: Prologue is packed with VFX made with Redshift, C4D and After Effects.

The inhabitant of an orbital space station receives a message about a serious anomaly on a planet that is soon to be colonized, so he goes there to find out what happened. So begins the first installment of Researcher: Prologue, a planned trilogy by Vladislav Solovjov , a self-taught art director/director and motion designer who is currently based in London.

Crammed with impressive VFX, this wonderfully cinematic short was made using Cinema 4D, Redshift and After Effects, with occasional simulation work in Houdini. We talked with Solovjov about his work on this sci-fi passion project, which has been five years in the making. Here’s what he had to say.

How did you get into this industry?
Solovjov: I’m self-taught; I haven’t done any courses or been to university. I just
relied on tutorials and forums. I started in 2009, so it’s been a pretty long journey from nothing to something. I started out doing the Video Copilot tutorials by Andrew Kramer, and the first software I used was After Effects. About a year later, I discovered Cinema 4D and decided to switch from 2D motion graphics to full computer-generated imagery.

What kinds of projects have you been working on lately?
Solovjov: I’m currently working full time as a CG generalist at Ruroc in London. I was living in St. Petersburg, Russia, and collaborating with them on several projects for their motorcycle and snowboarding helmets and they offered to me job, so I moved to the UK. 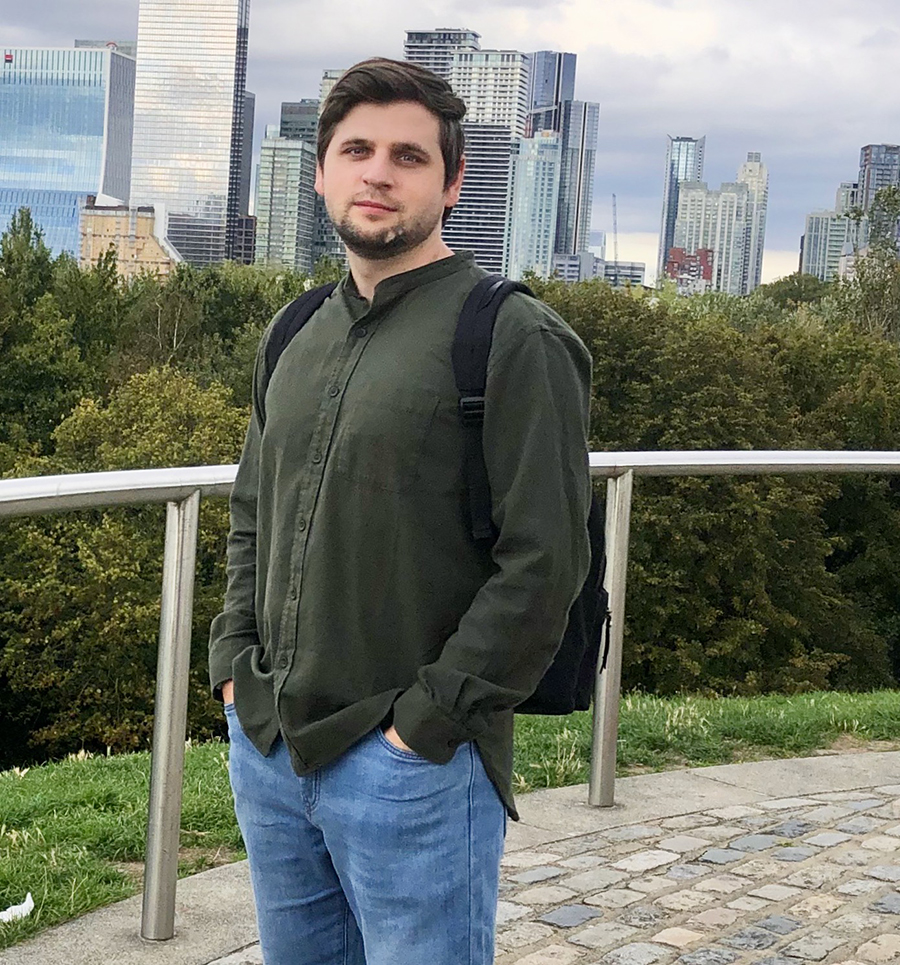 Tell us about Researcher Prologue.
Solovjov: I started working on it at the beginning of 2015, making the first draft concepts and just thinking about the script, and how I could put everything together. I spent two years struggling to find the best way to visually emphasize the themes I had in mind. This was the first time I’ve ever done anything like this, and it’s been a huge project.

The story is about a character who works on a space station. He receives a signal from the planet, and he needs to go to its surface to check it out himself. I don’t want to say too much about future episodes, but there will also be a mechanical droid that he’ll be using, so he can be in the laboratory. I do all of this in my spare time, so it will probably be 2021 before the next episode comes out. I’ve got quite a lot of work to do at Ruroc, and I also freelance to earn more money and get more exposure.

What was your modeling process for this?
Solovjov: I actually try to cut corners wherever possible. I’m not the kind of 3D guy who concentrates on putting the perfect picture together or tries to model perfect topology. I usually focus on what will be close to the camera, and I have good topology and textures for those objects. I used Cinema 4D’s polygon selection because it’s a really good timesaver, and I hardly used any UV maps at all. I mostly used cubic and planar projection textures in Redshift because it was much easier and faster.

The space station exterior was modeled by Evgenii Park, whose nickname is “klickstop”. We collaborated together, and I gave him design clues for what wanted to see. He’d refer to my design references, but he was free to do things in his own style. That’s why we had such a wide variety of styles and geometry in the film. The most difficult part was animating everything.
I modeled and animated some of the characters myself, but I also used Mixamo for a few scenes to save time. 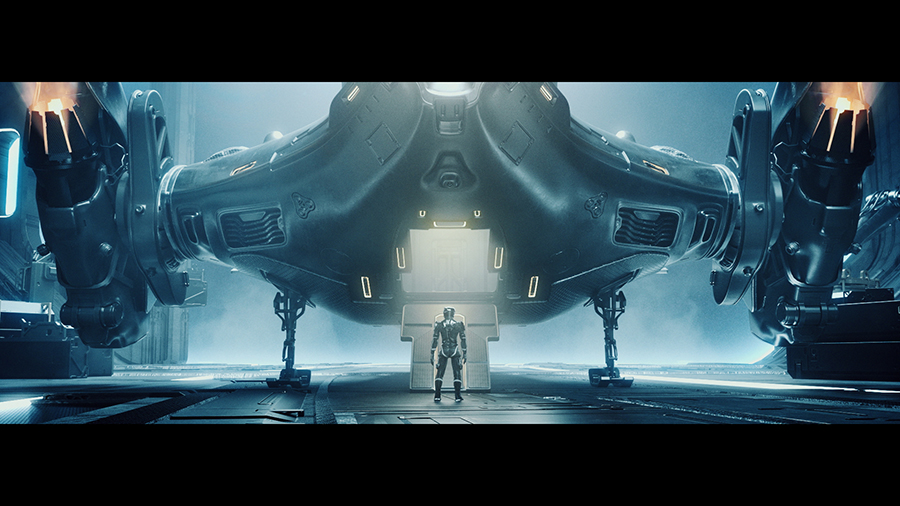 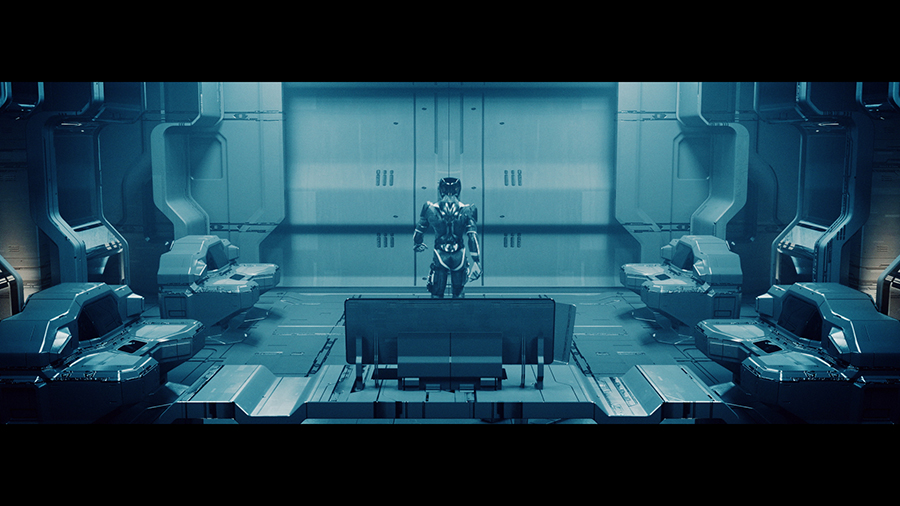 How did you achieve the look you wanted?
Solovjov: I normally use a lot of composites for simulations, but for this I tried to push the boundaries and do a perfect beauty pass and not rely so much on compositing. I did a few layers of color grading in After Effects and used the standard Redshift presets for rendering. The clouds are VDB files I got from Houdini and they are fully 3D. Occasionally, I use Houdini for smoke and cloud simulations, but I also use X-Particles because it’s really easy to integrate smoke right inside Cinema 4D. It’s worth mentioning that I have a lot of presets already done. I prepare VBD sequence in my spare time because I know I’ll need them one day.

For the haze effect in the landscape shots, I rendered the position pass and the Z-depth pass in Redshift. The spotlight in Redshift is perfect; really pretty. But compositing is a real time saver when you just need to make slight adjustments to things like clouds and haze effects. 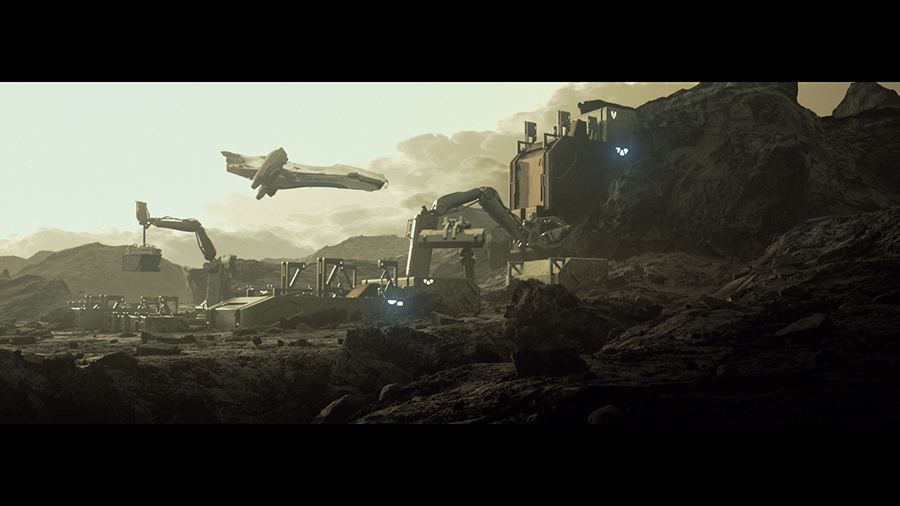 What kind of response have you gotten so far and how is the next episode going?
Solovjov: The response has been really good. It’s done really well at a few festivals. But there’s always room for improvement, and I’ll need to do more to impress myself and fans next time. I’ve decided to remodel the character for the next episode. He’s one of the main parts of the movie, and his suit and a few metallic parts are bending in an unnatural way. I need to make those things look better, more real and natural. It’ll be good, at least I hope so.

Steve Jarratt is a freelance writer in the UK.